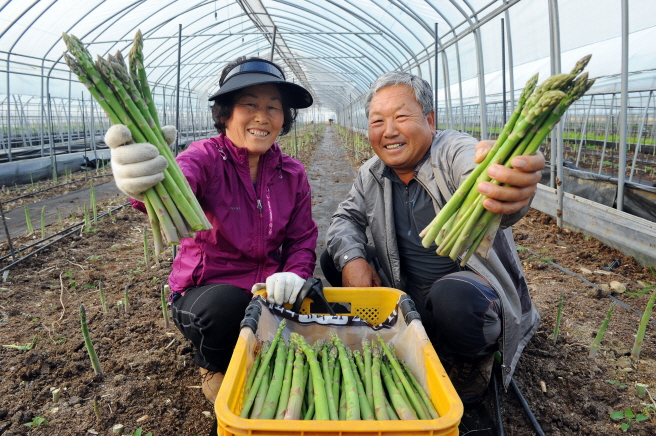 Asparagus harvest in the province accounts for 70 percent of the country’s total. (image: Yanggu County Office)

Since April 20, the province has been selling 1-kilogram boxes of asparagus produced by farmers for 7,000 won (US$5.74).

The promotion is gaining huge popularity among consumers, with a total of three special sales of 1,500 to 2,000 boxes all selling out within a minute.

The province’s use of online channels to sell agricultural goods was prompted by the coronavirus pandemic.

Gangwon Province, which offers good conditions for asparagus farming, mainly produces it as a cash crop. Asparagus harvest in the province accounts for 70 percent of the country’s total.

While the province planned to export 45 tons this year, access to international markets has been blocked due to the outbreak of COVID-19.

If the production destined for export flowed into the domestic wholesale market, prices would be expected to plunge.

The provincial government decided to directly connect farmers and consumers as it did during last month’s special potato sale in order to stabilize prices and offer farmers an easy way to sell their produce.

All profits from sales will be delivered to farmers, and the provincial government will subsidize delivery and packaging costs. If all the planned supplies sell out, the province is expected to generate a total of 140 million won (US$114,740) in sales.

This new sales method – direct to consumer – has been lauded by both farmers and buyers.

Farmers are able to sell their produce remain afloat, having found a viable market for produce destined for export, while consumers can enjoy fresh domestic asparagus at a lower price than that which is imported from overseas.

Farmers can also enjoy the benefit of free advertisement.

“About half of the asparagus distributed in the country is imported from Mexico and Thailand,” said Jeon Shin-jae, a researcher at the Gangwondo Agricultural Research and Extension Services.

“The asparagus in this special sale promotion is fresh, high-quality and cheap, and is incomparable to imports.”