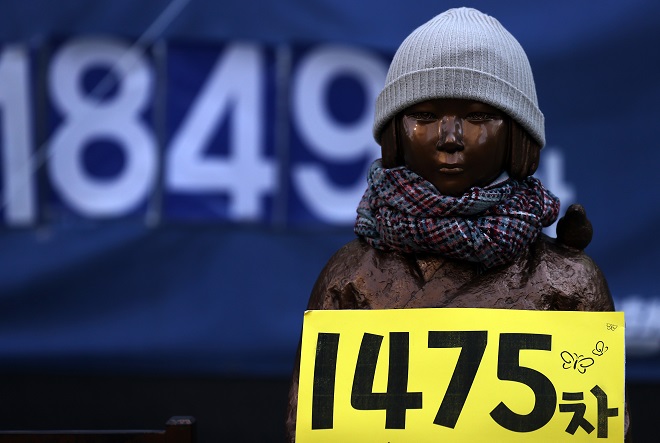 This photo, taken on Jan. 20, 2021, shows a statue symbolyzing victims of Japan’s wartime sexual slavery in front of the Japanese Embassy in Seoul. (Yonhap)

SEOUL, March 2 (Korea Bizwire) — A grandson of a legendary Korean independence fighter said Tuesday that he will reject a request from the Harvard president to reconsider his decision not to donate his family’s historical archives over a controversial paper portraying wartime sexual slaves as prostitutes.

“I received a short polite email from President Bacow. He said it was an unfortunate situation but he sided with academic freedom. He had to. He asked if I would reconsider donating,” Cuddy said in an email to Yonhap News Agency.

“I will not donate anything to Harvard since it supports liars like Ramseyer with the veil of academic freedom,” he added, referring to J. Mark Ramseyer, who wrote the controversial paper claiming that Tokyo’s wartime sexual enslavement was voluntary prostitution.

In 2015, Cuddy began discussions with Schlesinger Library at Harvard on the transfer of his archives, which are part of the legacy of his grandfather and his mother, Susan Ahn Cuddy — the first Asian American woman in the U.S. Navy.

Their talks proceeded in fits and starts. They gathered momentum early last year but stalled due to the COVID-19 pandemic. After the Ramseyer matter flared up, Cuddy’s family “unanimously” chose to terminate talks with Harvard, he said.

The archives included documents, letters, records, thousands of pictures and personal items of the legendary independence fighter and his daughter.

Born in 1878 in South Pyongan Province, currently in North Korea, Ahn Chang-ho, whose pen name was Dosan, was one of the first to immigrate to the United States, where he played a role in helping his homeland gain independence.

He was one of the founders of Korea’s provisional government and was a statesman, educator and freedom fighter all his life until his death in 1938.

His eldest daughter, Susan Ahn Cuddy, joined the U.S. Navy in 1942, becoming the first Asian American woman to join the armed service. She served in the Navy until 1946 and later worked for the Naval Intelligence and National Security Agency.