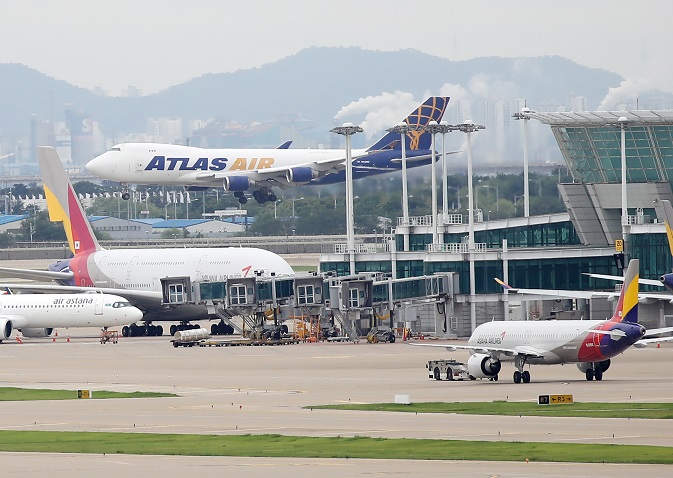 An air plane take off from a runway at Incheon International Airport, west of Seoul, on Sept. 1, 2021. (Yonhap)

SEOUL, Sept. 22 (Korea Bizwire) — South Korea’s airlines have drastically reduced their aircraft fleets over the past two years as demand for air travel dried up due to the prolonged COVID-19 pandemic, industry data showed Wednesday.

The total number of aircraft operated by the nation’s 10 carriers currently stands at 372, down from 414 in 2019, according to the data compiled by the transport ministry.

Korean Air Lines Co., the country’s leading full-service carrier, operates 159 planes, down from 170 in 2019, and its smaller rival Asiana Airlines Inc. has shed three jets over the period to now have 83.

Other low-cost carriers have streamlined their aircraft fleets, while debt-laden budget carrier Eastar Jet Co. reduced 19 jets as it filed a court receivership in January.

Local airlines have decreased the number of aircraft by returning jets whose lease contracts ended as part of cost-cutting efforts amid COVID-19.

Local airlines operated some 237,000 international routes in the first eight months of 2019, but the number tumbled 80 percent to 46,000 over the same period this year due to the prolonged pandemic, according to the ministry.