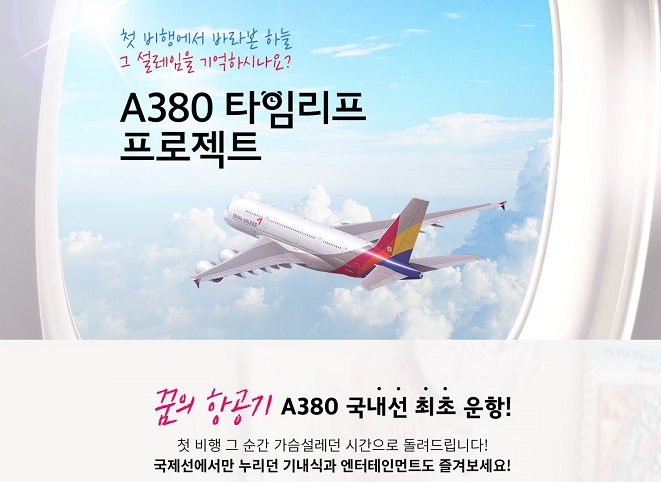 This image, provided by Asiana Airlines Inc. on Sept. 24, 2020, shows an ad for its envisioned sightseeing flights.

SEOUL, Oct. 8 (Korea Bizwire) — The airline industry is attempting to overcome the devastation brought on by the coronavirus pandemic by offering ‘flight without destination’ programs travelling through domestic airspace and returning to the airport of departure.

The ‘A380 Flight Tour’ by Asiana Airlines Inc., a two-hour journey through domestic airspace, sold out only 20 minutes after it was opened, including all business suites and business seats.

Air Busan Co., a low-cost carrier (LCC) of Asiana Airlines, is also offering a similar program for the first time among LCCs starting this week.

The two-hour flight will take off in Busan and fly over Gangwon Province, Seoul and Jeju before returning to the airport of departure.

While Korean Air Lines Co. and Jeju Air Co. have yet to release any similar flight packages yet, both were found to have taken interest in the programs, sources said.

While the airline industry is still questioning the sustainability of such programs that are limited to domestic airspace, they are choosing to introduce them nonetheless, primarily to overcome a massive loss in revenue caused by the coronavirus pandemic.

The airlines plan to start with domestic flight plans first, before offering international ones. International flight programs are expected to attract more passengers since they will allow duty-free shops to reopen.

Taiwan, in partnership with Korea Tourism Organization, introduced a flight plan that departs from Taipei and flies over Jeju Island, which sold out less than four minutes after it opened.

International flight programs are expected to revitalize a number of industries including airlines, duty-free shops and travel agencies.

“Airlines are mainly hurt by the shutdown of international flights, so international fly-over programs will turn out to be more attractive,” a source familiar with the airline industry explained.