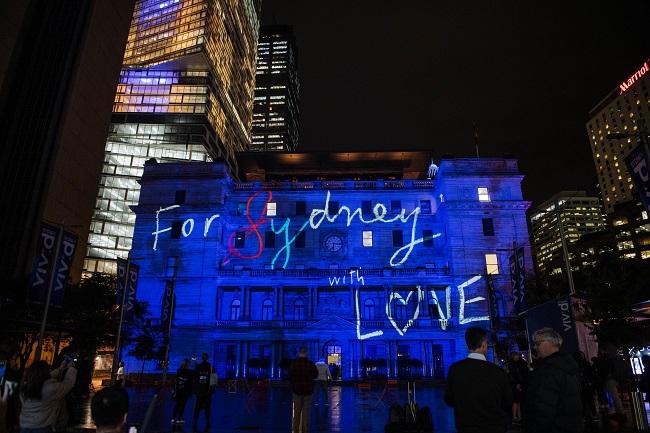 This is Sydney’s dress circle, with the Sydney Opera House, Sydney Royal Botanic Garden and Sydney Harbour Bridge framing that iconic harbour view. Follow the Light Walk along the waterfront and see the harbour itself become a canvas for the world’s greatest light show including the unmistakable heritage façade’s of Customs House and the Museum of Contemporary Art Australia, transformed into moving canvases.

Lighting of the Sails
Artist: Martu Artists (Australia)
Location: Sydney Opera House
In 2022, the stunning Martumili collective painting Yarrkalpa-Hunting Ground, Parnngurr Area 2013 is brought to life across the spectacular sails, extending the Martu Artists’ stories beyond the walls of a gallery.

Our Connected City
Artist: Mandylights (Australia)
Location: Circular Quay
Watch what happens when kaleidoscopic lighting design connects the city’s architecture. Suddenly, the skyline is suffused with colour and we see the city in a different light. 2022 will see both sides of Sydney Harbour Bridge emblazoned with hundreds of colour changing lights.

For Sydney With Love
Artist: Ken Done / Spinifex Group / James Morrison (Australia)
Location: Customs House
A master of colour, Ken Done captures the joy of Sydney like no other artist and this vibrant animation projected onto Customs House shows how his beloved home city informs all his work. It is a story of optimism, colour, and sheer delight.

Future Natives
Artist: Chris Daniel (Australia)
Location: Along the Light Walk
Follow the Vivid flock along the Light Walk where you’ll spot stylised light sculptures resembling our native birds. This ‘birdwatching’ adventure highlights the diversity and survival skills of Greater Sydney’s feathered friends whose habitats and existence are encroached upon by our sprawling cityscapes, increasing populations and lifestyles.

Endless Love
Artist: Michaela Gleave (Australia)
Location: Circular Quay Station
The perfect spot to snap a selfie, these giant letters above the station building evoke the hopes, dreams and aspirations the city inspires. It reflects our passion, our compassion, and our free spirit. It reaches out to the world with a message of hope and captures the joy and boundless optimism that makes Sydney one of the truly great global cities.

Vivid Light on Sydney Harbour
Location: On the water Sydney Harbour
In a first for the festival, see lights on vessels sailing on the harbour sync with the animated Martumili collective painting-Yarrkalpa-Hunting Ground-that illuminates Sydney Opera House. Together, boats and ferries become part of a coordinated display that moves across the colour spectrum as they sail across the harbour. Jump on board for a special Vivid Sydney tour with Cadman Cruises, Captain Cook Cruises, Fantasea Cruising, Sydney Harbour Tallships and more.

Halo
Artist: illumaphonium: Gemma Davis (United Kingdom) / Michael Davis (United Kingdom)
Location: Near Chinese Garden of Friendship, Darling Harbour
Music is the one universal communication tool that requires no language. This innovative and interactive installation brings you together with fellow festival-goers in a shared moment of spontaneous music-making.

Our Connected City
Artist: Mandylights (Australia)
Location: Crown Sydney at Barangaroo
Crown Sydney will be part of the vast Our Connected City installation for the first time in 2022, joining other Sydney icons as they are emblazoned with hundreds of colour changing lights. In this expansive visual spectacle, all of the lights are coordinated in perfect synchronisation and uniformity. Together, they connect us to our city and our environment.

Hear our Sydney stories – of people, places and our city’s distinct diversity and multi-faceted histories – and celebrate what makes Sydney unique. At the MCA you can engage with the concept of care at Critical Now and Urgent Futures (10 June) or get young people involved in a festival-style museum takeover at Genext x Vivid Ideas (4 June).

For more information on Vivid Sydney and to book tickets, go to www.vividsydney.com. Get social using @vividsydney #vividsydney.

About Vivid Sydney
Vivid Sydney is an annual celebration of creativity, innovation and technology, which transforms Sydney for 23 days and nights. Staged for its 12th year in 2022, Vivid Sydney fuses mesmerising art displays and 3D light projections with exhilarating live music performances and deep-dive discussions from some of the world’s brightest minds, as well as the Sydney Opera House Lighting of the Sails. Vivid Sydney is owned, managed and produced by Destination NSW, the NSW Government’s tourism and major events agency. 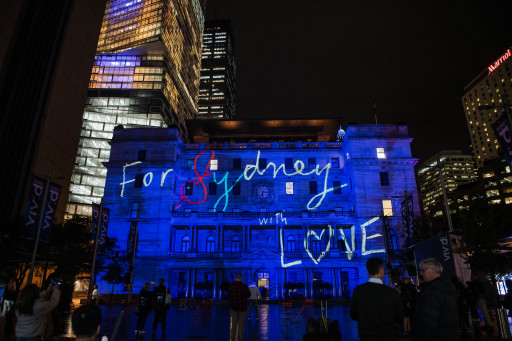 Image 1: For Sydney With Love 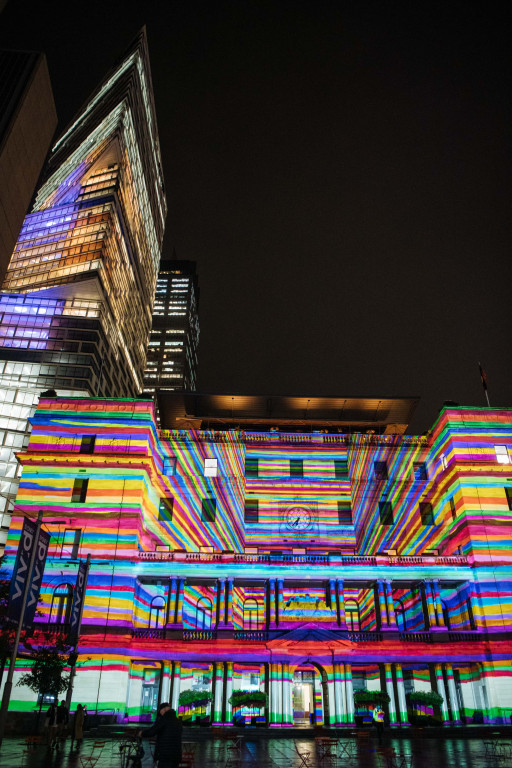 Image 2: For Sydney With Love