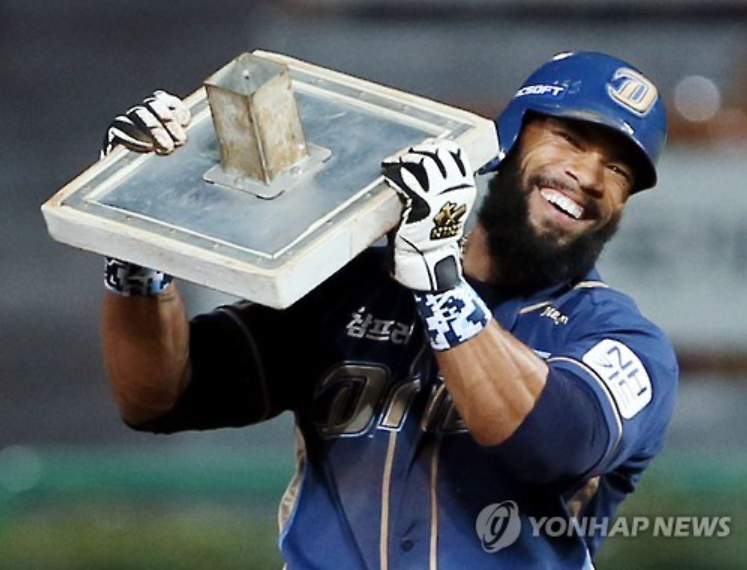 Eric Thames of the NC Dinos lifts the second base bag after stealing his 40th base of the Korea Baseball Organization season for the unprecedented 40-40 season in Incheon on Oct. 2, 2015. Thames has 47 home runs. (Image courtesy of Yonhap)

Thames, the hard-hitting first baseman for the NC Dinos in the Korea Baseball Organization (KBO), swiped his 40th bag of the season in the third inning against the SK Wyverns on the road in Incheon, west of Seoul. He also hit his 47th home run of the season in the first inning.

In his second KBO season after stints with the Toronto Blue Jays and the Seattle Mariners, Thames has been rewriting the record book all season. There have been seven 30-30 seasons in the KBO, posted by five different players, but no one before Thames had done the 40-40. He also hit for the cycle twice this year, the first player to do so in the KBO’s 33-year history.

In Major League Baseball, there have been four 40-40 seasons, mostly recently by Alfonso Soriano in 2006 with the Washington Nationals.

After leaving yard for a three-run bomb in his first time up, Thames drew a leadoff walk in the top of the third. SK’s left-handed starter Shin Jae-woong threw to first base to keep Thames in check. Yet on Shin’s first pitch to the batter, Thames took off and beat the throw by catcher Chung Sang-ho.

Thames is a strong MVP candidate this year. He entered Friday’s game as the KBO’s leader in batting average (.380), on-base percentage (.497), slugging percentage (.788), runs scored (129) and doubles (41). Before that three-run shot in the first inning, Thames ranked third with 46 home runs and tied for second with 136 RBIs.

The 28-year-old has reportedly drawn interest from Japanese clubs. Earlier Friday, the Dinos announced that they will negotiate with Thames for his third season with the club.