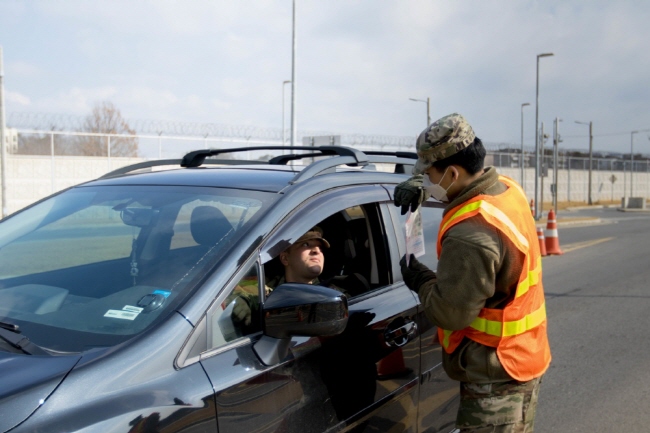 A military guard at U.S. Army Garrison Humphreys in Pyeongtaek, 70 kilometers south of Seoul, screens an entrant to the compound amid the novel coronavirus outbreak. (image: U.S. Forces Korea)

SEOUL, April 7 (Korea Bizwire) — An American citizen working at a U.S. air base in the city of Pyeongtaek tested positive for the coronavirus Tuesday, bringing the total number of USFK-related infections to 20, the U.S. Forces Korea (USFK) said.

The civilian worker has been in quarantine at his off-installation residence since Thursday, when he last visited Osan Air Base, as the military’s leadership directed him to do so due to his direct contact with a person who contracted the COVID-19 virus, according to the military.

“USFK health professionals are currently conducting contact tracing and thoroughly cleaned known Osan Air Base facilities visited by the employee,” it said in a release.

It is the third COVID-19 case confirmed at the base in Pyeongtaek, some 70 kilometers south of Seoul, near Camp Humphreys, where the USFK’s headquarters is located.

After reporting the first patient Friday, USFK shut down part of the Osan base, as the military brought its Health Protection Condition Levels (HPCON) a notch higher to “Charlie Plus” or “C+” for the base.

Across the peninsula, the military remains at a level of “high” risk, and USFK Commander Gen. Robert Abrams has declared a public health emergency to issue related guidance and enforce compliance.