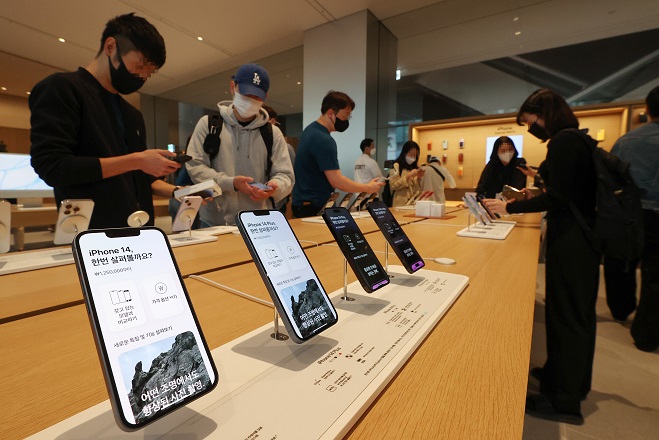 Apple products are displayed at a store in central Seoul in this file photo taken on Oct. 7, 2022. (Yonhap)

The move came after the Fair Trade Commission (FTC) launched a probe into Apple amid criticism that the company charges commission fees based on the consumer price inclusive of value-added tax only on South Korean developers.

The FTC said that while overseas app developers paid a 30 percent commission to Apple, local firms were asked to pay a 33 percent rate, as they were charged based on the price that includes a 10 percent value-added tax.

“Recently, Apple said it will voluntarily correct the problematic action by January next year,” Han added. “Should Apple fix it well, it will ease difficulties of domestic app developers to some extent.”

The chairperson said that the FTC will continue monitoring fair practices in the app market and establish an ecosystem that benefits both operators and developers.