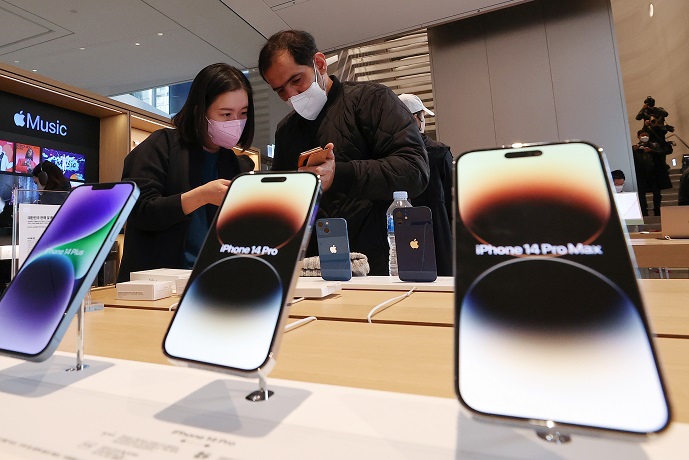 In this file photo taken Oct. 7, 2022, Apple products are displayed at a store in central Seoul. (Yonhap)

SEOUL, Dec. 7 (Korea Bizwire) — Apple Inc. said Wednesday it will introduce the new pricing policy, including changes in tax calculation for South Korean app developers, from next year in a move to comply with the local antitrust regulator’s probe.

“Apple today announced the most comprehensive upgrade to pricing capabilities since the App Store first launched, including changes to tax calculation that will allow Apple to reflect taxes in the commission calculation to increase developer proceeds in South Korea and six other countries,” the U.S. tech giant said in a release.

The FTC launched a probe into Apple’s alleged unfair practices in September.

Apple imposes a 30 percent commission from in-app payments on app developers. But Korean firms are asked to pay a 33 percent rate, as they were charged based on the revenue that includes a 10 percent value-added tax.

The company said it will set the commission based on tax information provided by local developers.

“Going forward, local developers will be able to provide Apple with tax category information that allows Apple to estimate and remove taxes, such as value-added tax, before calculating commission,” Apple said, adding the new pricing scheme will take effect in January next year.

Apple said its new pricing policy will encourage Korean innovators, who see more than half of their revenue come from outside of Korea, to engage more in the App Store.