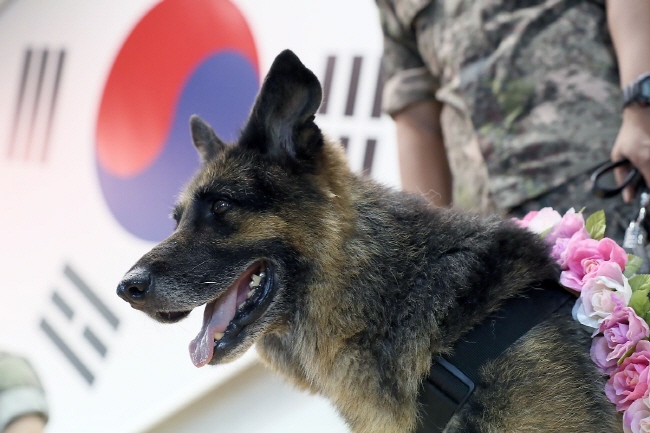 SEOUL, Sept. 15 (Korea Bizwire) — From saluting the national flag to congratulatory messages from comrades, a touching ceremony held at an Army barracks last month was much the same as any other event marking the retirement of soldiers from active duty.

There was one difference, though: Those being honored were military working dogs.

After successfully completing missions in field units for about eight years, three veteran canine officers — German shepherds Dansoo and Gado and Belgian Malinois Moogong — took to the stage at the military working dog training center in Chuncheon, Gangwon Province, in late August, for the event to celebrate the start of their new lives as civilians.

“Do you remember the day we met for the first time? All the days I spent with you were filled with joy and excitement. I am so sorry to say goodbye to you. Please stay healthy, and I will come back to you when I am discharged from the military,” Pfc. Shin Jae-hoon told his companion, Dansoo.

The first official retirement ceremony for military working dogs, which was attended by 100 dogs and their handlers, was “part of the military’s efforts to improve the overall treatment of canine members in honor of their contribution,” said Lt. Col. Park Chang-bo, who heads the center.

In South Korea, there are 1,300 military working dogs across all services. Becoming a member of the military and leading a life as a canine officer are tough tasks, according to the Army.

From birth to about six months old, future military working dogs are reared at the Chuncheon center to go through a screening test to see if they meet military standards or not.

Of around 130 puppies born at the center every year, a mere 30 percent qualify, according to center officials.

The chosen dogs then receive official training before being assigned to such duties as patrolling, tracking and detection in accordance with their characteristics at around the age of 2, they added.

The dogs receive continuing training wherever they serve, as well as intensive eight-week programs every year at the Chuncheon center.

In order to continue their active duty, the dogs have to go through re-examination tests on a regular basis. 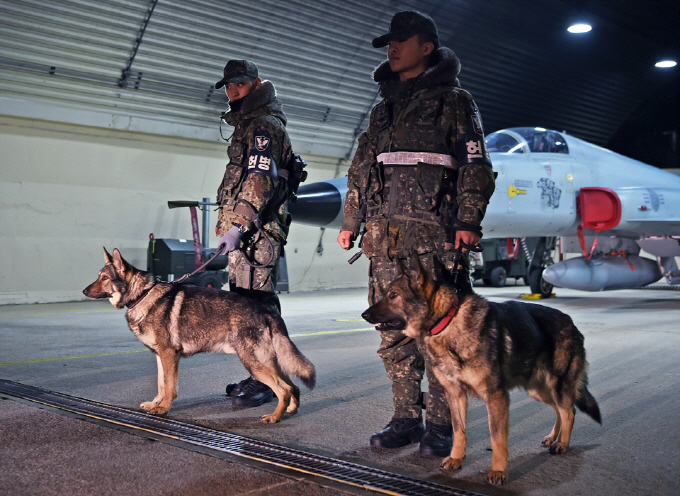 After reaching around eight, military working dogs are relieved from active duty. They then spend the rest of their lives either at the barracks or with adopted families.

Military working dogs came under the media spotlight recently, after seven-year-old male German shepherd Dalgwan, affiliated with the Army’s 32nd Division, found a 14-year-old girl on a hill in the country’s central city of Cheongju around 10 days after she went missing last month.

Dalgwan was part of extensive search teams that involved more than 5,500 rescue workers.

The Army held the first official funeral for a dog in August and has been pushing to create a memorial park for military canines inside the training center compound.

“In accordance with changing public awareness, the military has been trying to improve the working and living conditions for military working dogs and to better honor canine veterans. But we still have a long way to go,” Park said, asking for continued public support for and interest in his comrades.