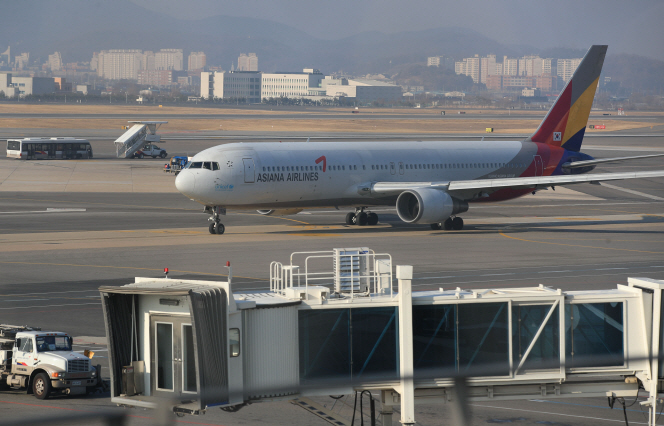 Asiana entered an emergency management system in February and executives returned up to 40 percent of their salaries. (Yonhap)

Asiana Airlines has already suspended most of its flights on international routes as an increasing number of countries close their borders or impose stricter entry restrictions in their fight against COVID-19.

In the latest self-help plans, Asiana will have all of its 10,500 employees take unpaid leave for 15 days in April and executives return 60 percent of their wages, the company said in a statement.

“The coronavirus outbreak has driven down the number of passengers on international routes by 85 percent and the reservation rate for April has plunged by 90 percent from a year earlier. The unpaid leave is an inevitable decision as more than 70 percent of employees have become idle,” the statement said.

Asiana entered an emergency management system in February and executives returned up to 40 percent of their salaries.

In March, Asiana Chief Executive Han Chang-soo did not receive a penny and other executives returned 50 percent of their wages.

Asiana suspended all of its flights on 11 routes to Japan for the March 9-31 period due to entry restrictions. The only route available to Europe is the Incheon-Frankfurt route, with six other European routes not in service.

Asiana canceled its direct flights to Beijing scheduled for Thursday and Saturday this week. It had previously operated 25 routes to China, but only nine were in service as of Monday.

The airline said that it has decided to not transport passengers on its outbound flights from Incheon airport to Beijing from March 31 through April 25.

It will, however, pick up passengers from the Chinese capital on the return flights that will take place on Tuesday, Thursday and Saturday.

The move comes as China steps up efforts to stem imported COVID-19 cases.

On Sunday, the Chinese aviation authorities announced that all international flights bound for Beijing will first land at one of 12 designated airports for health checks from Monday before being allowed to fly to the capital city.