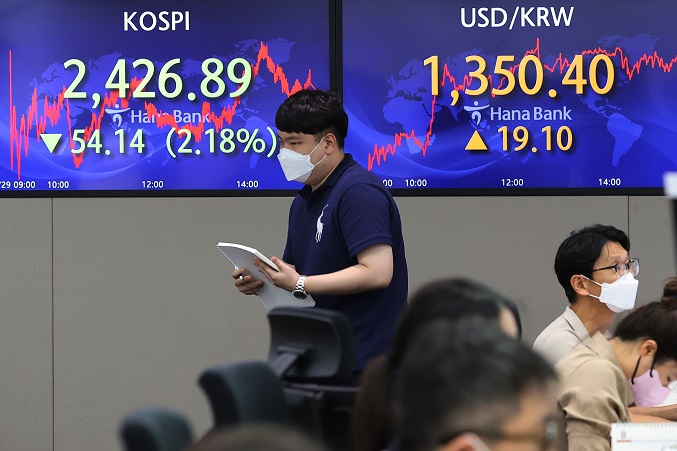 An electronic signboard at the dealing room of Hana Bank in Seoul shows the benchmark Korea Composite Stock Price Index (KOSPI) having dropped 54.14 points, or 2.18 percent, to close at 2,426.89 on Aug. 29, 2022. South Korean stocks tumbled as investors grappled with renewed concerns over the U.S. central bank’s aggressive monetary tightening. (Yonhap)

The combined net income of 414 asset management firms stood at 362.5 billion won (US$274.1 million) in the July-September period, down 41.5 percent from the same period a year earlier, according to the preliminary data from the Financial Supervisory Service.

Compared with the previous quarter, however, they posted a 113.1 percent jump in net income.

The on-year decline was blamed on a fall in profits from investment in securities, which plunged 74.1 percent over the cited period to 51.6 billion won.

Fee and commission revenue inched down 1.6 percent to 1.03 trillion won, the data showed.

Their operating income dived to 375.5 billion won from the previous year’s 657.7 billion won.

Their return on equity, a major gauge of profitability, was at 11.5 percent as of end-September, down 11.5 percentage points from a year earlier.

Of the asset management firms, 188 companies were in the black while 226 others logged a loss in the cited quarter.

As of end-September, about 1,401.1 trillion won were under their management, up 2.9 percent from three months earlier, the data showed.