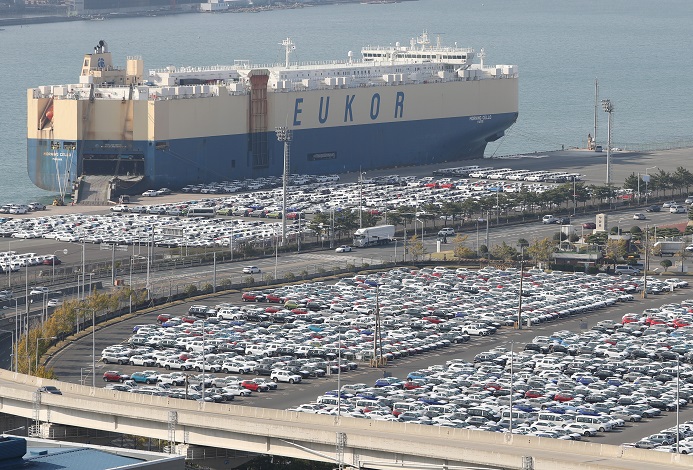 This file photo, taken Nov. 2, 2021, shows cars produced by Hyundai Motor Co. waiting to be exported on a dock in Ulsan, 414 kilometers southeast of Seoul. (Yonhap)

The country’s outbound shipments of cars came to US$42.6 billion last year, up 23 percent from the previous year, according to the data compiled by the Korea Customs Service.

It marked the largest amount since 2014, when auto exports were valued at $44 billion.

The brisk exports came even as Korean automakers suffered a global shortage of auto chips.

The 2021 gain was mainly attributed to the base effect as shipments of autos were severely dented in 2020 due to the COVID-19 pandemic.

Exports of eco-friendly autos, including hybrid models and electric cars, remained solid and demand in the United States and Europe revived amid the economic recovery, according to the customs office.

Autos accounted for some 7 percent of South Korea’s exports.

The South Korean economy grew 4 percent last year, the fastest growth in 11 years, on the back of robust exports of chips and autos.