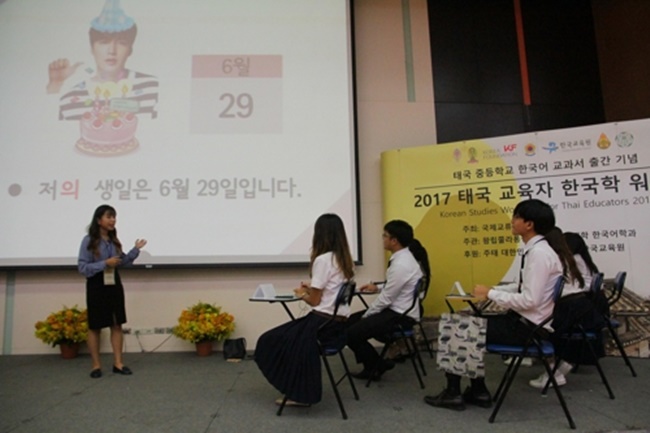 This undated photo, released by the South Korean education ministry, shows a class on learning the Korean language in Thailand. (Image: Yonhap)

BANGKOK, April 5 (Korea Bizwire) - The average marks for the Korean language test were the highest among those for seven foreign languages, including Japanese and Chinese, in this year’s Thai college exam, the Korean Education Center said Thursday.

In the exam, known as the Professional and Academic Aptitude Test and conducted by the National Institute of Educational Testing Service in February, the average score of the 4,087 students who sat for the Korean language test was 103.27 out of 300.

Given this is the first time the language has been set as a second foreign language test in the exam, and the relatively higher scores bears testimony to Korean language learners’ zeal for success in the subject.

The education center plans to complete its publication of Korean-language textbooks for Thai junior and high school students by October this year as part of its efforts to help bridge the competence gap between Korean language learners and beef up education of language in the Southeast Asian country.

It will also team up with the Office of the Basic Education Commission, affiliated with the Thai Education Ministry, to implement the nurturing of Korean language teachers next month.

A total of 42,571 students applied for the second language tests in the 2018 Thai college exam, with 4,087 students, or 9.6 percent, of the entire second foreign language exam takers, taking the Korean language test.