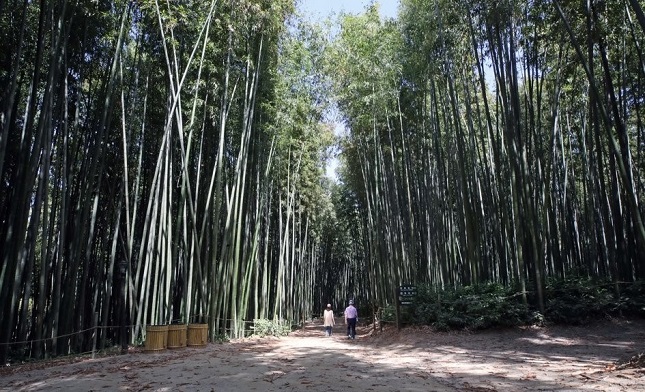 Tourists walk along the Philosopher’s Path at Juknokwon bamboo forest in Damyang County, 344 kilometers south of Seoul, on July 14, 2020. (Yonhap)

DAEJEON, Oct. 22 (Korea Bizwire) — The roots of bamboo plants, which are highly fertile and have a strong life force, expand by up to 11 meters (2.8 meters on average) on a yearly basis, a study showed showed Thursday.

To identify the characteristics of the expansion of bamboo forests, the National Institute of Forest Science conducted field research this year and last at 27 sites, including Jinju and Hadong in South Gyeongsang Province.

Researchers also analyzed aerial images of eight sites, including Sacheon and Geoje, taken between 2000 and 2019. This analysis showed that bamboo forests expanded by up to 4 hectares (2 hectares on average) over the past 20 years.

It is difficult to investigate the annually expansion of each bamboo forest across the country. However, it’s estimated that the nation’s bamboo forests expand by 1,000 square meters per 1-hectare on a yearly basis.

A 1-hectare area of bamboo forest can absorb more than 30 tons of greenhouse gases, more than three times higher than that of pine tree forest.