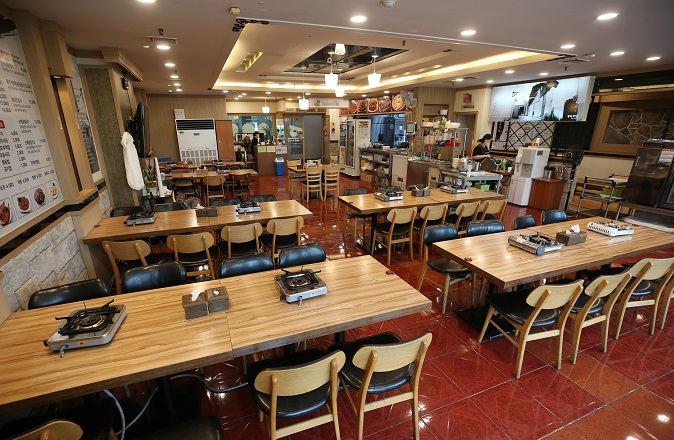 This Sept. 1, 2020, file photo shows an empty restaurant in the Songdo international business district in Incheon, west of Seoul, amid a new nationwide COVID-19 outbreak that began in mid-August. (Yonhap)

SEOUL, Oct. 30 (Korea Bizwire) — The government on Friday resumed a national discount coupon program aimed at resuscitating the domestic travel and dining industries that have suffered severely from the COVID-19 pandemic.

The Central Disaster and Safety Countermeasure Headquarters said the government will start releasing discount coupons for travel programs, restaurants and lodging facilities around the country, in stages at 2 p.m. Friday, as part of a 90.4 billion-won (US$76.2 million) project to revitalize domestic spending.

The program was first introduced in August but was soon suspended due to a resurgence of new virus clusters.

The travel coupons will offer 30 percent discounts on 1,112 tour products. Also if a person dines out three times, a 10,000 won refund will be offered on the fourth occasion.

Separate coupons that offer 30,000 won to 40,000 won discounts for hotels and other lodging facilities will be distributed to 1 million customers starting Nov. 4.

In light of concerns that the program, which promotes social gatherings, could end up prompting another mass outbreak, officials said the program is subject to change depending on the disease control situation.

“We decided to resume the program based on a comprehensive review of the situation, where mass transmissions are under control and antivirus medical measures remain sufficient,” a government official said.