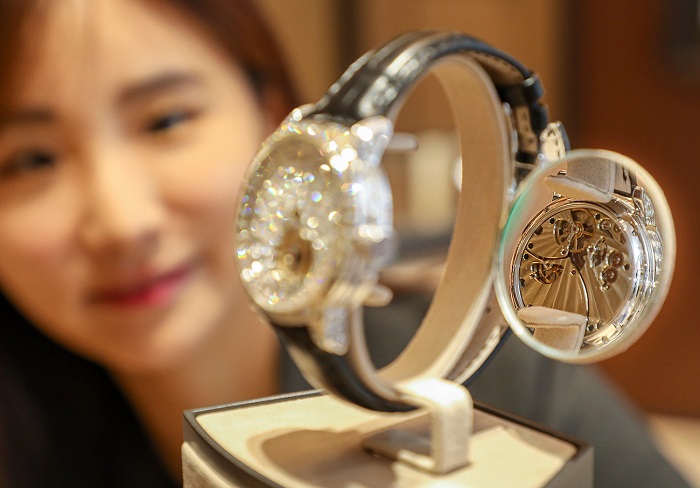 A model shows off luxury watches at a Seoul department store in this file photo. (Yonhap)

Members of the younger generation in their 20s and 30s have risen as the primary consumers of luxury merchandise, gladly lining up in front of department stores to purchase limited editions of luxury brand goods.

The popularity of luxury goods in South Korean has bucked a global trend, as last year’s luxury sales worldwide ($286.9 billion) dropped by 19 percent from the previous year ($354.4 billion).

“While the overall economy in South Korea stagnated due to the coronavirus, the income levels of between 6 and 7 million households actually rose,” said Seo Yong-gu, a professor of business administration at Sookmyung Women’s University.

“Restrictions on foreign travel seem to have prompted consumers to spend their money on luxury brands.”

Luxury products are no longer limited to older, richer consumers as members of the MZ generation, born in the the 1980s and 2000s, have become primary consumers in the luxury market.

Shinsegae Department Store reported that customers in their 20s and 30s accounted for 10.9 percent and 39.8 percent of total luxury consumption, respectively.

Lotte Department Store also reported that the 20- and 30-somethings together comprised 46 percent of all luxury consumption, jumping from 38.1 percent in 2018. 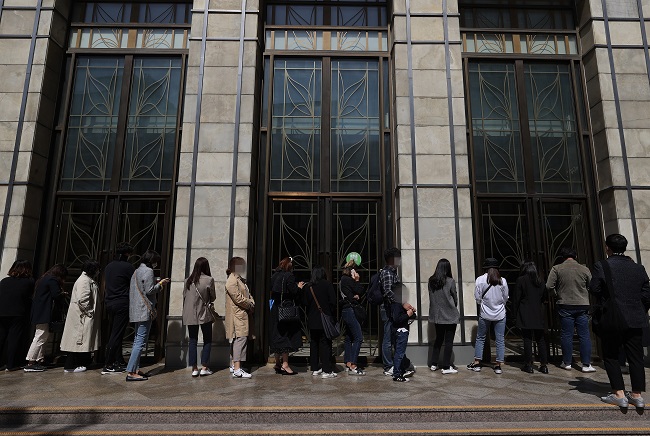 Younger consumers, unlike the older generation, are more or less willing to resell their luxury items.

Limited editions of luxury goods, for instance, can be used for a couple of years and resold in the second-hand market without a drastic price cut. If the items are rare, they only rise in value as time passes.

So, for younger consumers, scrambling to buy items as soon as the department store opens its gates is both a game and an investment.

“They are willing to withhold spending for a couple of months to save up and buy that one, very expensive product for themselves.”

Kwak Keum-joo, a psychology professor at Seoul National University explains that these trends are a classic example of the Veblen and Panoplie effects.

The Veblen effect refers to a rise in consumer demand based on the perception that what’s more expensive is more exclusive and one of a kind.

The Panoplie effect refers to the sense of belonging in which carrying a certain luxury item makes the owner feel equivalent to a higher class or society.

“The younger generation seems to find self-esteem and high sense of achievement as they enjoy that sense of rising to the standard of celebrities by buying what they use or wear,” Kwak said.