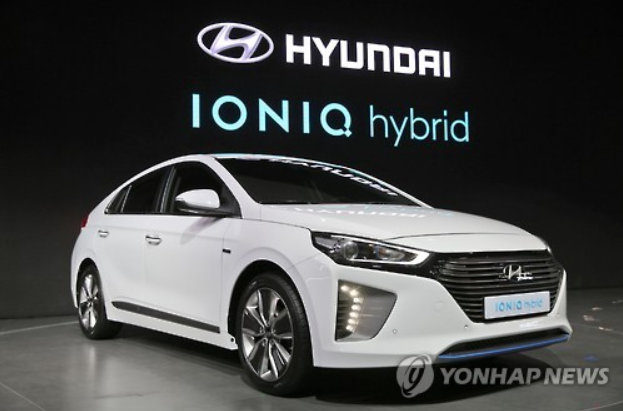 Hyundai Motor Co. armed with relatively diverse hybrid lineups, including the Ioniq, shown here in the image, led by selling 6,398 vehicles, followed by Kia Motors Corp. with its quarterly sales of 1,711 units.

Carmakers operating factories in South Korea sold a combined 8,117 hybrid electric vehicles here during the January-March period, up 10.4 percent from a year earlier, according to the data provided by the Korea Automobile Manufacturers Association.

The growth came despite the protracted low crude oil prices, which could ellipse the fuel efficiency merits of hybrid cars, one of their main selling points over combustion engine vehicles.

This year, sales dropped again and remained down until February, but Hyundai Motor’s Ioniq helped turn them around.

Launched in January, the Ioniq, Hyundai Motor’s first hybrid model based on its own production platform, saw its sales reach 3,054 units during the first quarter, the data showed.

Kia Motors’ Niro hybrid SUV launched in mid-March has also been propping up green car sales here. Since its official debut, more than 4,000 units of the Niro have been sold, according to company data.