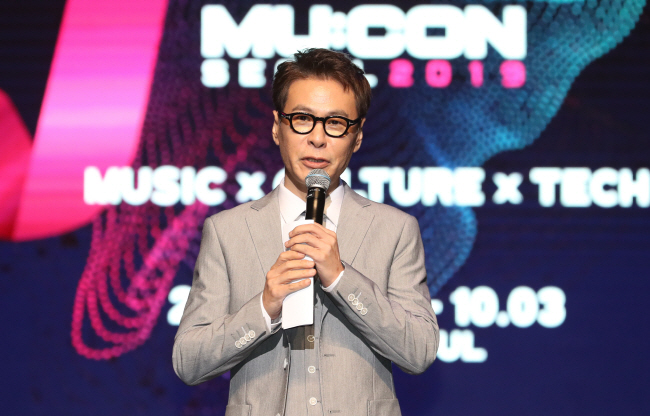 Singer-songwriter Yun Sang announces the lineup of MU:CON 2019 in a press conference in Seoul on Sept. 19, 2019. (Yonhap)

The event, also known as Seoul International Music Fair, will hold its 8th edition in the outdoor areas surrounding the Convention and Exhibition Center (COEX) in southern Seoul on Sept. 30 and will end on Oct. 3, according to the Korea Creative Content Agency.

Through its seven previous editions, the music industry event has emerged as a major international business opportunity for South Korean and global music executives and as a venue for discovering and launching the next wave of indie or superstar K-pop music acts for the global music scene.

It also includes Jeong Mi-jo, a diva from the 1970s, and new band “numnum,” formed by Lee Yun-jeong, a member of disbanded group Pipiband.

Under this year’s theme, “Music, Culture, Tech,” the festival will feature a music conference where, among others, Nicole Frantz, an executive at U.S.-based Capitol Music Group, will give a presentation on Capitol Music’s K-pop venture.

The festival will also feature a collaborative concert, “MU:CON Collabo,” presenting music jointly produced by Korean artists and musicians from outside of Korea.

As its influence expands, MU:CON has appointed Yun Sang as artistic director for the 2019 event, the first such appointment in the fair’s history.

Having joined the process to pick the 2019 lineup, Yun told reporters on Thursday, “I felt like I was kindly introduced to great musicians who made me feel sorry that I didn’t know them before.”

He added, “MU:CON aims to present the depth and diversity of our popular music in a very thorough manner. I myself am very curious how interested foreign buyers will be.”