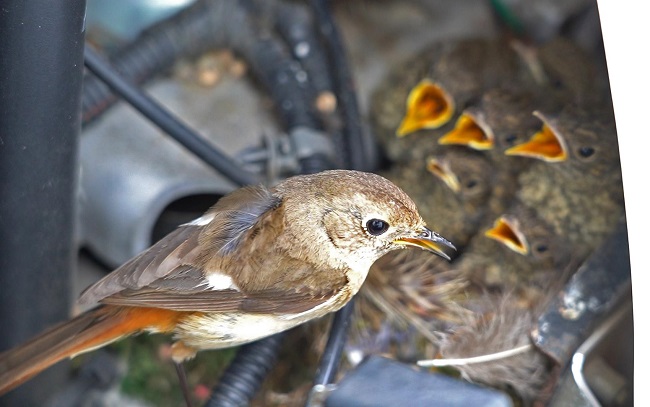 The birds gained attention of the local staff as the chicks hatched safely despite the car being driven on several occasions every day. (image: Culture Expo Foundation)

SEOUL, June 23 (Korea Bizwire) — The Daurian redstart, a bird species with commonly found in South Korean suburbs or the countryside, is gaining attention after the recent discovery of nests built in unusual locations.

A full-grown redstart is only 14 centimeters long, weighing as little as 17 grams. The bird is known to build nests between rocks or inside tree holes to fend off predators.

A redstart family has been raising seven chicks underneath the hood.

The birds gained attention of the local staff as the chicks hatched safely despite the car being driven on several occasions every day. After the nest was discovered, the vehicle was placed under constant monitoring without being driven.

Under special care of the staff, the redstart chicks safely left their nest after reaching adulthood last week. The foundation decided to leave the electric vehicle in the same location since the redstarts may want to return.

“The park covers an area of 560,000 square meters, and it is still a mystery why the birds decided to build their nest in a car used by so many employees,” said Jeong Seung-hwan, the staffer who first discovered the nest. 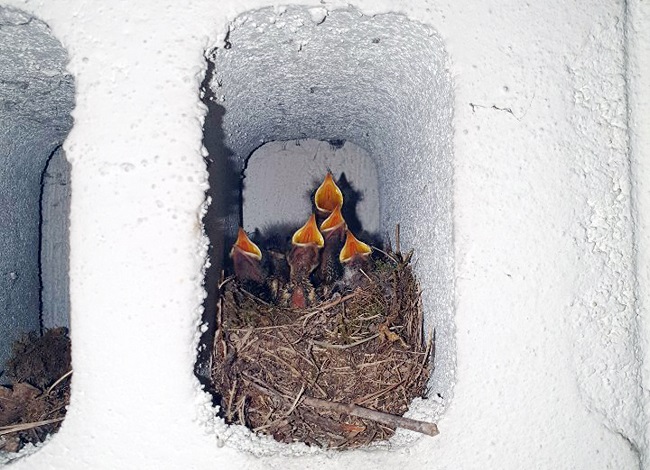 In Ulsan, six redstart chicks were recently found nesting in one of the walls of the Ulsan Metropolitan Police Agency’s underground parking lot.

The birds are being fed by their parents, and appear to be healthy and growing well.

“The agency is located at the foot of a mountain, that’s probably why the birds managed to fly in,” said a source from a local wildlife protection agency. “In a month, the chicks will grow big enough to leave their nest.”