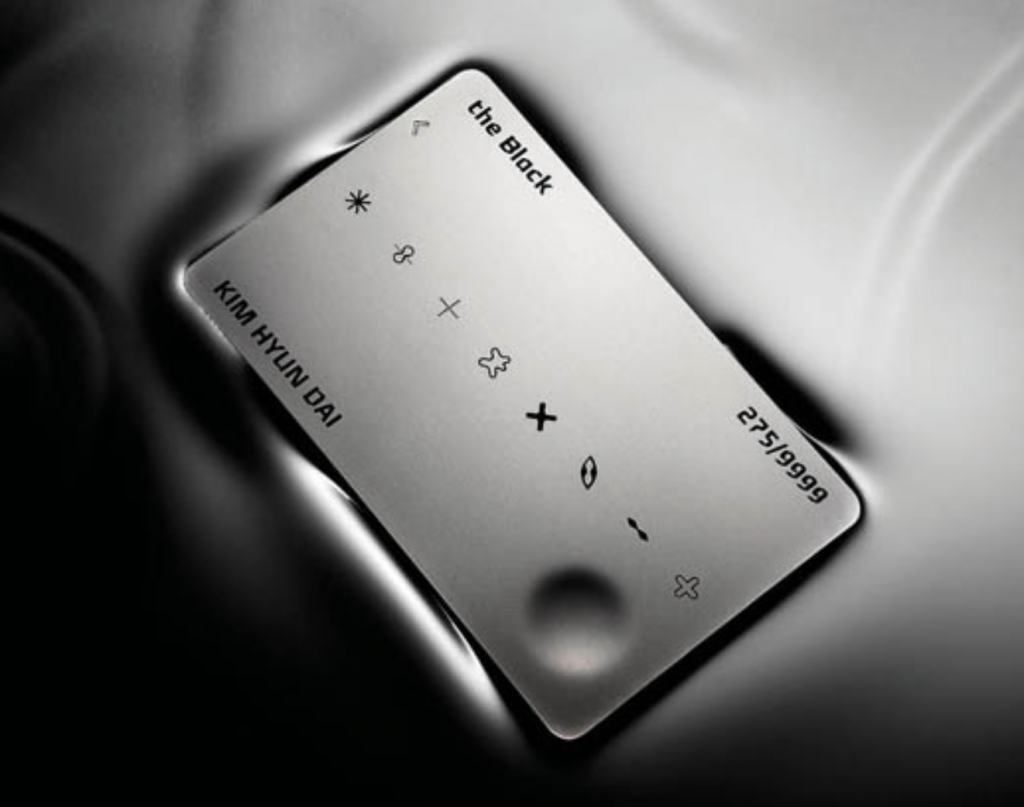 Hyundai Card’s “The Black” not only operates on an invitation-only basis, but those accepting the invitation are also evaluated by an eight-person deliberation committee that can only give final approval with a unanimous decision. (image: Hyundai Card)

In fact, the benefits far outweigh the annual fees in terms of their value, making these “black cards” a loss-making product for the companies – it’s like an automaker investing millions into making sports cars that rarely sell.

Yet, the cards are an important asset not only for attracting the one-percenters but also to uphold their reputation as credit card companies.

Four of the most expensive credit cards in terms of annual fees are Hyundai Card’s “The Black,” Samsung Card’s “Raume O,” Hana Card’s “Club 1,” and KB Kookmin Card’s “Tantum.” Annual fees for each of the four cards come in at about 2 million won ($1,712).

Among the popular benefits of owning one of these cards is upgrades on plane tickets.

For instance, purchasing a business class flight with Club 1 would get you a free first class upgrade once a year to the Americas, Middle East, Europe, and Oceania, and three times a year for Southeast Asia, Japan, and China.

Considering that a first class ticket from Incheon to New York costs over 10 million won, compared to 5 million won for business class, one upgrade alone already makes up for the annual membership fee.

Then, there are the coupons and vouchers for high-end hotels, luxury brands, and spas, with The Black offering Kiton, Brioni, Ermenegildo Zegna, and Swiss Perfection, to name a few, in addition to discounts and other conveniences, like valet parking, at premium outlets across the country.

The best part of the VVIP cards is the 24-hour concierge service, which, according to sources, is like a private errand service that can help cardholders with almost everything, from booking a plane ticket to making a restaurant reservation, travel planning, and even requests like “go get me Omega’s Apollo 11 40th anniversary limited edition watch from London”.

A card company is even said to have arranged a flying class for a cardholder whose dream had been to become a jet fighter pilot.

“VVIP card owners are not looking for a couple million won worth of rewards,” said an official from a card company. “They want benefits that can’t be bought with money.”

So what are the qualifications for owning one of these cards?

Some of the basic requirements include spending at least 10 million won per month, total minimum assets of 10 billion won, and cardholders are typically college professors, high-ranking government officials or staff at university hospitals, company executives, lawyers, accountants, and even professional athletes who make at least 200 million won a year.

However, these are only the most basic prerequisites. Applicants are also assessed by rigorous in-house deliberation committees that evaluate both their financial capabilities and social influence.

“Celebrities and billionaire children in their 20s are those who get rejected a lot by credit card companies,” an official said.

The Black is the pickiest of all. The card not only operates on an invitation-only basis, but those accepting the invitation are evaluated by an eight-person deliberation committee that can only give final approval with a unanimous decision.

The card was introduced in 2005 with limited membership of only 9,999. After more than ten years, the number of members still stands around 2,000, according to sources. The first cardholder was Chung Mong-koo, the chairman of Hyundai Motor Group, while G-Dragon, the leader of K-pop group Big Bang, is also said to be among The Black holders.