SEOUL, Oct. 2 (Korea Bizwire) — K-pop group BLACKPINK said Friday it wanted to show its growth as an artist and send out a message of hope and positive energy with its first-ever full-length album.

Earlier in the day, the quartet unveiled the album “The Album,” which includes main track “Lovesick Girls” as well as hits that have broken into music charts such as “How You Like That” and “Ice Cream” featuring Selena Gomez.

While BLACKPINK, the country’s highest-charting female act on global pop charts, has churned out megahits such as “Ddu-du Ddu-du,” “Kill This Love” and “Boombayah,” this is the first full-length album Jisoo, Jennie, Rose and Lisa are releasing since their debut in August 2016.

“We wanted to not only express various emotions on love but also show girls that have grown up. The lyrics and ambience of ‘Pretty Savage’ have a feeling of boldness and confidence, and since it’s our first album, we wanted to imbue words that people think of when they think of BLACKPINK,” Jennie said in a livestreamed press conference.

Regarding “Lovesick Girls,” which Jennie said all members were happy to choose as the main track, the group hoped that the song will send out positive vibes to listeners.

“People all go through the experience of despair, whether it happens while racing for a dream or falling in love. We wanted to capture the story of life, how despite the falls, we find something and stand up. It’s not a sad song but a song we wanted to put in a message of hope and positive energy,” said Jisoo.

The dance track, which mixes country music-themed guitar tunes with a sophisticated melody, talks about “still looking for love” despite the heartaches that come from “slippin’ and fallin’.” Jisoo and Jennie also took part in composing and songwriting.

The members, meanwhile, said they look forward to collaborating with more artists and are grateful for how such experiences have helped shape their musical journey.

For this album, they worked with Selena Gomez on the adorable tune “Ice Cream” and rapper Cardi B on the catchy track “Bet You Wanna.” 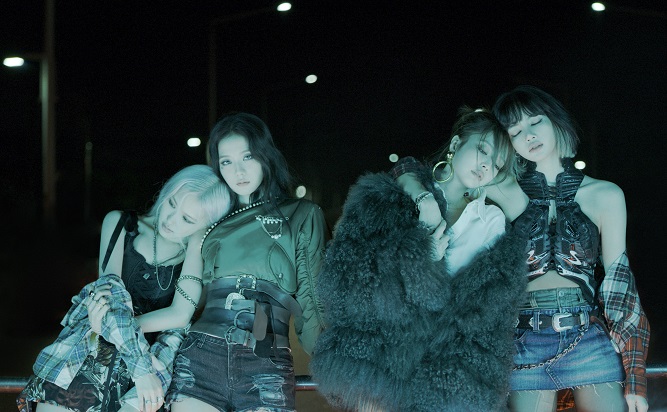 “Ice Cream,” which was pre-released in late August, debuted at No. 13 on the Billboard Hot 100, and its music video has racked up more than 303 million views on YouTube in just over a month.

“We’re very honored and grateful to be working with artists we enjoyed listening to when we were young,” said Lisa.

Jisoo, meanwhile, said the collaborations have helped the group move beyond its musical boundaries.

“We’re very honored to do collaborations. We always want to show a new and different side of us, and when we work with another artist, (our different sides) blend and bring out songs with a different edge,” she said.

The new coronavirus has pounded the global music industry, and BLACKPINK is no exception.

Friday’s press conference was livestreamed on YouTube, and the group has no fixed schedule on meeting with fans in person.

But the K-pop sensation, which has racked up 49.2 million YouTube subscribers to become the world’s second-most subscribed musician on the global platform, said it has something for fans to wait for.

“It’s really sad that we have to perform onstage without our fans, but when things become safer, we’d like to go on a tour. We really miss our fans — both here and abroad — and we are preparing for something, so please look forward to it,” said Lisa.

Preorders for “The Album” have topped 1 million, including 670,000 in South Korea and 340,000 from overseas, according to YG Entertainment, the group’s management agency.

If the album records 1 million copies in actual sales in its first week, it will set a record for a girl group in the history of K-pop, the agency said.