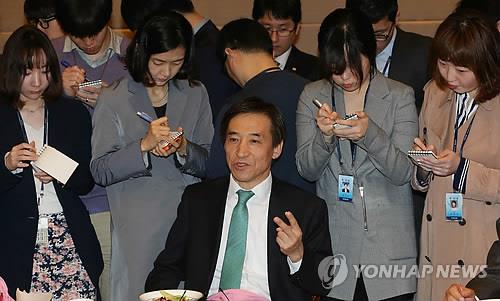 Bank of Korea Gov. Lee Ju-yeol speaks to reporters at the central bank headquarters in Seoul on April 28, 2015. (Image: Yonhap)

Bank of Korea (BOK) data released last week showed that the country’s gross domestic product (GDP) grew 0.8 percent on-quarter in the first three months of the year, up from a 0.3 percent on-quarter gain tallied for the fourth quarter of 2014.

BOK Gov. Lee Ju-yeol said while the quarterly result is “not satisfactory,” it still points to economic recovery for Asia’s fourth-largest economy.

“While the speed of recovery is weak, we have seen positive signals recently. Consumer sentiment has improved and the property and stock markets are robust,” Lee told reporters ahead of a meeting with local economists and professors.

Housing transactions are gaining momentum on the back of low borrowing costs. The number of home transactions came to 111,869 in March, up 24.4 percent from the same month last year, according to the Ministry of Land, Infrastructure and Transport.

Fueled by ample liquidity, the country’s stock market has been on a bull run with the benchmark index, the KOSPI, rising nearly 13 percent this year to end at 2,157.74 on Monday.

Backed by such data, consumer sentiment reached 104 for this month, up from 101 posted in March. A reading higher than 100 indicates that optimists outnumber pessimists.

The central bank chief, however, noted that external risks, stemming from a weakening yen and slowing growth in China, are still factors that may hamper growth by hurting exports in an export-reliant economy.

Lee added that second-quarter GDP data will be a key turning point in gauging the course of economic recovery, reiterating the need for structural reform in order to sustain growth in the long term.

Seoul has been pushing to reform its labor and financial markets to create a business-friendly environment for corporations to spur growth.

As part of the scheme, the government is seeking a more flexible job market that allows firms to easily hire and dismiss employees as well as revamp bank procedures to invigorate lenders’ funding channels to businesses.