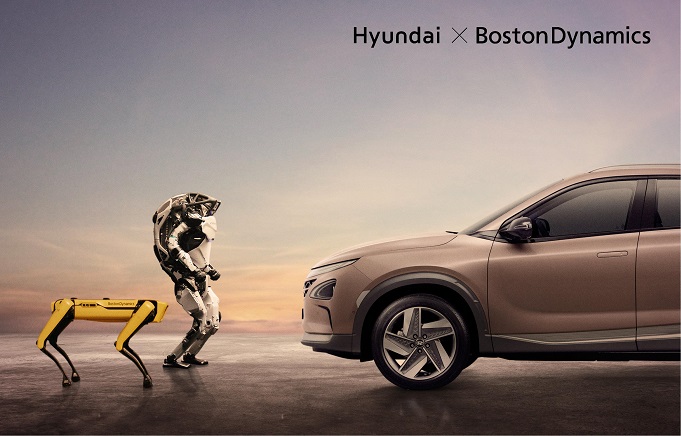 Spot (L), a four-legged robot, and Atlas, a humanoid bipedal robot (C), designed by Boston Dynamics, and Hyundai Motor Co.’s fuel cell electric vehicle (R) are seen in this photo provided by the Korean automaker and two other affiliates, which officially acquired the U.S. startup on June 21, 2021.

Boston Dynamics demonstrated its latest robotics technologies during an online media event after the automotive group in June completed the US$880 million purchase of its 80 percent stake from Japanese conglomerate Softbank .

Boston Dynamics, spun off from the Massachusetts Institute of Technology in the early 1990s, was sold to Google in 2013 and again to Softbank in 2017.

The Boston-based robotics firm said it has been working with Hyundai Motor to explore ways to use its robot smart factories and logistics and develop new products, taking advantage of the autonomous, sensor and other expertise.

In a demonstration video, a pair of humanoid bipedal robots called Atlas smoothly run, jump, leap, vault and perform back flips, which are modeled and designed on computers.

Its four-legged robotic dog, called Spot, equipped with cameras and other censors, is designed to work in a range of environments, covering utilities, manufacturing, construction and offshore oil rigs, Boston Dynamic said. 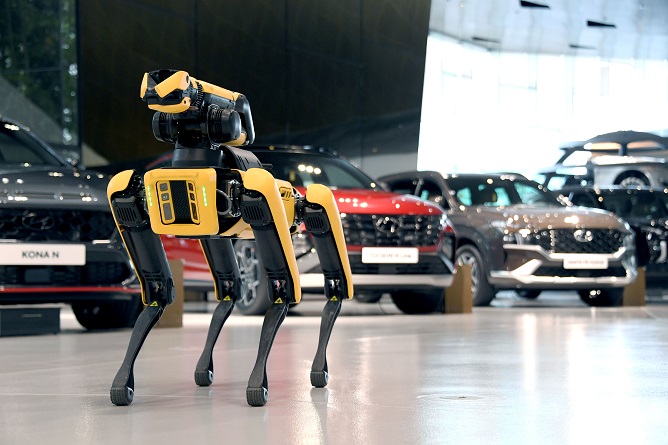 This photo, provided by Hyundai Motor Group, shows Spot, an agile mobile robot of Boston Dynamics, which the South Korean carmaker has taken over. Hyundai said on Sept. 10, 2021, that it is seeking ways to utilize the robot in facility inspections and security.

The robotics firm said its huge robotic arm, called Stretch, capable of moving boxes and building pallets is currently in an early pilot stage and expected to be commercialized in late 2022.

It is the first M&A deal after Hyundai Motor Group Chairman Chung Euisun took helm of the Korean automotive group last year with a pledge to transform the company into a future mobility provider.

In late 2019, Chung said half of the group’s business will be related to car manufacturing, followed by urban air mobility with 30 percent and robotics with 20 percent.