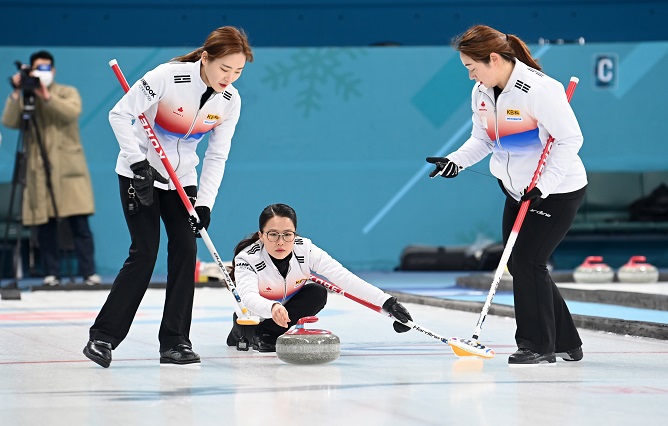 Members of the South Korean women’s curling team train during their media day event at Gangneung Curling Centre in Gangneung, around 240 kilometers east of Seoul, on Jan. 21, 2022. (Yonhap)

Gallup Korea polled 1,002 South Korean adults from Tuesday to Thursday on their thoughts on the Feb. 4-20 Winter Games in the Chinese capital. And 65 percent said they were not interested, compared with 32 percent who showed an interest in the competition.

The other 3 percent declined to answer.

In the same poll conducted prior to the 2018 Winter Olympics in the South Korean host city of PyeongChang, 71 percent had said they were interested in the event.

Gallup Korea noted the level of apathy for Beijing is virtually the same as for the Tokyo Summer Olympics, held last year after a one-year postponement caused by the COVID-19 pandemic.

The latest poll had a margin of error of plus or minus 3.1 percentage points at a 95 percent confidence level.

The polled were asked to select two sports that they were most eager to watch during the Beijing Winter Games.

Short track speed skating, where South Korea has won 24 gold medals to lead all countries so far, garnered the most support with 30 percent, followed by figure skating at 19 percent, speed skating at 16 percent and curling at 7 percent.

However, 47 percent of the polled said they were either not interested in any of the 15 Winter Olympic sports or they didn’t know anything about them.

From four years ago, curling was the only sport whose level of interest increased.

The South Korean women’s team won a surprise silver medal in PyeongChang and has qualified for Beijing too.