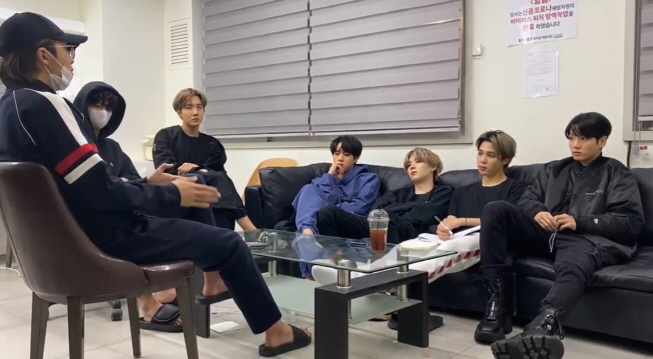 Members exchanged views on the theme and composition of the album and the desired music style in a free and open environment. (image: Big Hit Entertainment)

SEOUL, May 13 (Korea Bizwire) — K-pop boy band BTS, which has recently shared the process of working on its new album with fans, is drawing attention by unveiling a video of a group meeting this time.

BTS released a video of a meeting on the YouTube channel “BANGTANTV” Monday, where all seven members gathered to discuss the concept and message of the new album.

According to the group’s management agency, Big Hit Entertainment, the YouTube Live channel recorded a maximum number of viewers at 310,000 for simultaneous log-ins.

Members exchanged views on the theme and composition of the album and the desired music style in a free and open environment.

In particular, they brought up several keywords such as “Carry On” and talked about what kind of message they would give to those suffering from COVID-19.

“I want to tell the world that no matter what happens outside, people’s lives will continue,” RM said. “I thought the most important thing would be to show how we keep our daily lives going.”

Thinking of the keyword “telepathy,” he said, “When I look at Weverse, the fan community, and Twitter, there were many people who had a hard time because our concerts were canceled. How nice it would be if we could get all our sincerity across even if we did not say anything?”

Suga suggested that he hoped he could give comfort to an unspecified majority metaphorically, like “Spring Day,” rather than direct consolation.

“I hope the keyword of the new album will be letter. I think it would be fun to write several stories as the song itself becomes a letter,” he added.

“I am so grateful for the things I normally take for granted and the trivial things,” Jimin said. “I thought there would be a way to reflect them in a fun and comfortable way.”

Jin suggested, “We could write song in terms of ‘sympathy’?” and J-hope said, “I think it would be good to show the color of our old raw songs.”

Since then, the members have been freely discussing the length of the album, which is about five to seven songs, and the composition of the group and unit songs.

BTS has recently shown a series of images of the members coming up with a new album during a hiatus prompted by COVID-19.

It is a new “online communication” attempt to allow fans to observe the work process itself, not the result. On the May 7, V, RM and J-Hope also gathered to discuss their new album’s jacket, concept, and styling.