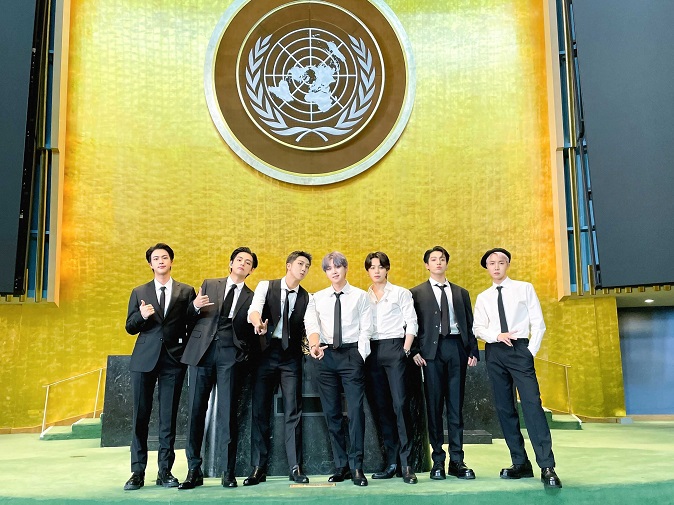 This image, captured from the Twitter account of BTS, shows its members posing for a photo at the second Sustainable Development Goals Moment (SDG Moment) event at the United Nations headquarters in New York on Sept. 20, 2021.

The septet wore suits by RE;CODE, an eco-friendly fashion brand run by South Korean company Kolon Industries FnC when they gave a speech at the opening of the Sustainable Development Goals Moment event at the 76th U.N. General Assembly on Monday.

All seven members wore upcycled clothes made with stocked apparel and eco-friendly fabric.

Upcycled products are made from waste recycled into a new product with added utility and design.

RM, leader of BTS, revealed that while preparing for the speech, he learned that many young people are interested in environmental issues and choose it as their field of study.

In efforts to further emphasize their eco-friendly efforts, South Korean President Moon Jae-in also wore an eco-friendly tie made with old plastic during his interview on American network ABC with BTS.

The tie was designed by Montsenu, a South Korean fashion startup.

Moon also wore the tie at the 2050 Proclamation for Carbon Neutrality held in December last year and the Leaders Summit on Climate in April.