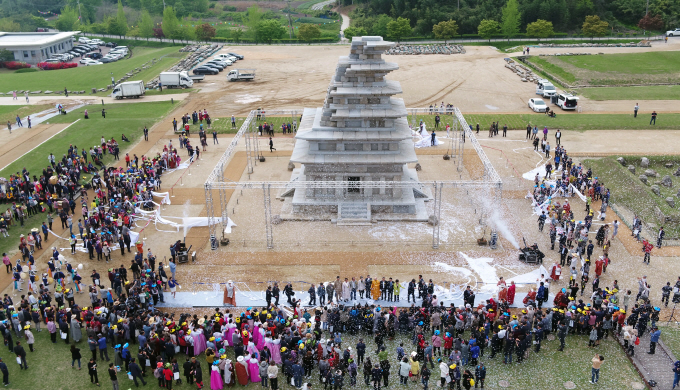 A ceremony marking the completion of 20-year-long restoration of the stone pagoda at Mireuk Temple takes place in the southwestern provincial city of Iksan on April 20, 2019. (Yonhap)

SEOUL, Apr. 30 (Korea Bizwire) — A South Korean Buddhist temple, known to be the country’s oldest, was finally unveiled Tuesday after two decades of restoration work, providing a glimpse into the flourishing Buddhist culture of the ancient kingdom of Baekje.

The six-tiered granite tower on the compound of Mireuk Temple in the southwestern provincial city of Iksan was officially disclosed in a ceremony marking the completion of some 20 years of extensive restoration efforts on the pagoda.

The Natural Treasure No. 11 is one of the most symbolic remains from the Baekje Kingdom, which lasted from the 18th century B.C. to 660 A.D. in the lower left half of the Korean Peninsula. The kingdom was one of the few channels through which Buddhism was introduced and bloomed on the peninsula.

Built during the heyday of the ancient kingdom during the reign of King Mu (600-641), the unveiled pagoda was one of the three towers, including a presumed wooden pagoda in the center, dotting the temple, the biggest Buddhist sanctuary at that time. 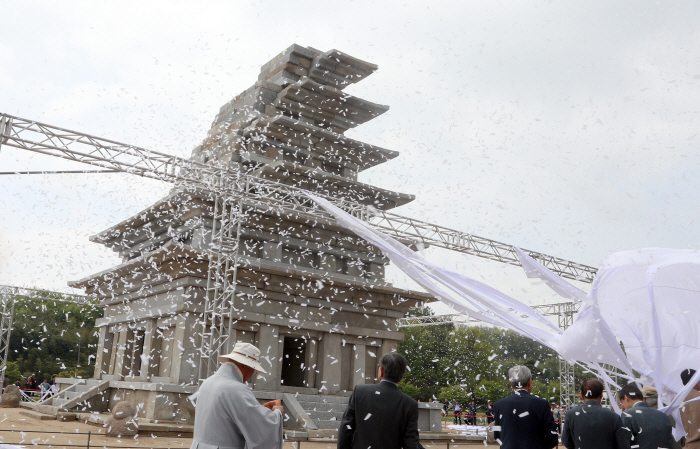 Participants in a ceremony marking the completion of 20-year-long restoration of the stone pagoda at Mireuk Temple remove a white cloth covering the pagoda in the southwestern provincial city of Iksan on April 20, 2019. (Yonhap)

Installed as a site of Buddhist worship and prayer for the well-being of the royal family, the granite pagoda holds an invaluable position in the study of Korean history and Buddhism, exemplifying the religious architectural transition from wooden pagodas to stone edifices.

Now, it remains the oldest Buddhist stone pagoda, standing 14.5 meters in height and measuring 12.5 m in breadth. It weighs about 1,830 tons.

Believed to be originally nine-tiered, the pagoda lost its top three layers around the 16th century during the Joseon Kingdom, which eschewed Buddhism in favor of Confucianism.

In 1915, while the Korean Peninsula was under the colonial control of Japan, the tottering pagoda was bolstered with cement in a makeshift restoration work.

But the concrete work propping up the pagoda was diagnosed “structurally unstable” in a safety test in 1998 and the state-run Cultural Properties Committee made a decision the next year to dismantle and reassemble the historic structure before the repair work finally began in 2001.

The final deadline for the restoration work, however, was delayed several times, eventually making it the longest-running cultural preservation project, spanning 16 years.

In the end, some 185 tons of concrete was scrapped from the pagoda and new granite blocks from the local Iksan region were added to put together a new restored pagoda. Now, new granite pieces account for 35 percent of the completed tower.

About midway through the repair work in 2009, a new record was discovered to pinpoint the origin of the tower, which was until then vaguely attributed to a joint collaboration between King Mu and his wife, Queen Seonhwa.

But the new record engraved in a sheet of gold, discovered in the process of the pagoda’s disassembly, showed that the pagoda was commissioned in 639 by the other wife of King Mu, a daughter of senior official Sataek Jeokdeok. 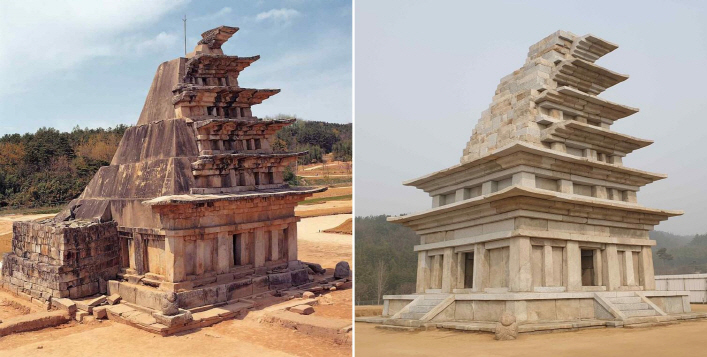 Mireuk Temple’s stone pagoda before (L) and after a 20-year-long restoration work. (Yonhap)

The restoration completion ceremony featured a dance drama performance, a report on the restoration proceedings and addresses by dignitaries before ceremony participants removed the white cloth that covered the pagoda.

“Over the past two decades of restoration work, there was neither haste nor impatience. The restoration work proceeded while keeping in mind the queen who built the pagoda 1,300 years ago,” Chung Jae-suk, head of the Cultural Heritage Administration, said in an address.

Chung also stressed that many efforts were made to preserve the historical value of the pagoda through systemic research.

Wrapping up the restoration, the National Research Institute of Cultural Heritage, in charge of the project, plans to publish a comprehensive report following the full process of the pagoda’s dismantling and rebuilding.

“We made special efforts to secure the ingenuity and the structural stability of the stone tower of Mireuk Temple,” an official at the institute said, adding, “We plan to publish a report outlining the result and the process of the restoration work by the end of this year.”