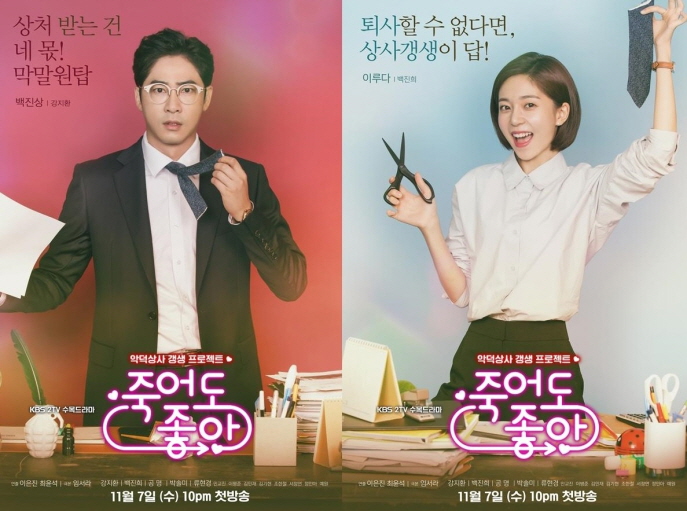 “Feel Good to Die” has deviated from the webtoon’s original focus on romance to address social issues in South Korean companies, such as slandering a working mom or the unfair transfer of employees. (image: KBS)

SEOUL, Dec. 3 (Korea Bizwire) — Television series based on webtoons are all the rage these days as TV networks battle to attract young viewers.

KBS 2TV’s “Feel Good to Die”, tvN’s “Tale of Gyeryong Fairy”, JTBC’s “Clean with Passion for Now”, and Olive’s “Eun Joo’s Room” are all based on webtoons.

Many webtoons tell interesting stories that go back and forth between reality and fantasy. Some webtoons have already garnered enough success to prove that they are viable as the basis for a television series.

Expressing the fantasy element of many webtoons on a television screen, however, is easier said than done.

In many cases, trying to translate these cartoonish expressions to the small screen becomes a source of criticism for overly childish or unrealistic content.

In addition, reflecting the wishes of webtoon fans to incorporate the originality of the webtoon, while listening to drama fans who want a realistic storyline is also the case in point.

While webtoons are easier and cheaper in terms of licensing, filmmakers are burdened by the effort and cost of bringing stories, scenes, and characters to life.

The resemblance factor of the characters in webtoons and television series, as well as computer graphics, may easily become sources of criticism.

“Feel Good to Die” is based on a webtoon, the Bad Boss Rehabilitation Project, where Lee Ruda, played by Baek Jin-hee, rescues her boss in a repeated time loop at a company they both work in.

“Feel Good to Die” has deviated from the webtoon’s original focus on romance to address social issues in South Korean companies, such as slandering a working mom or the unfair transfer of employees.

The television series managed to save the time loop scenario in the original webtoon.

“Focusing on the process of changing her boss was our decision to deliver the story to viewers in a more realistic manner,” said a source from the production team.

“We tried to out the spotlight on how the boss becomes a better person.”

“Webtoon episodes are not enough to create a television series,” he added. “But the original message is the same.”

TvN’s “Tale of Gyeryong Fairy” is the perfect example of what goes wrong when both webtoon and drama fans are left unsatisfied with a story.

The series is about a fairy that waited 699 years waiting for her reincarnated husband, and requires a significant amount of computer graphics to depict the reality imagined in the webtoon.

However, scenes where characters turn into cats, or fairies going out to fly were heavily criticized by viewers as disappointing. Webtoons fans also said some characters made the story “too linear”, or “too exaggerated”.

The drama shows a series of short episodes of the life of Shim Eun-ju (played by Ryu Hae-young), who lives a normal, ordinary life decorating her room, providing viewers with fun and interesting tips on how to decorate one’s space.

The popularity of webtoon-based television series is seen as a move to attract young viewers who are watching less TV every year.

For producers, webtoons are a great source of content to attract young viewers, thanks to their trendy storylines. In addition, the readily available storyline takes the burden off producers to create scenarios.

“While normal production of a television series takes a lot of time, webtoon-based series are a lot easier,” said a source from a broadcasting company.

“The only thing is that we need to add some variations and dramatizations to make the series more realistic.”