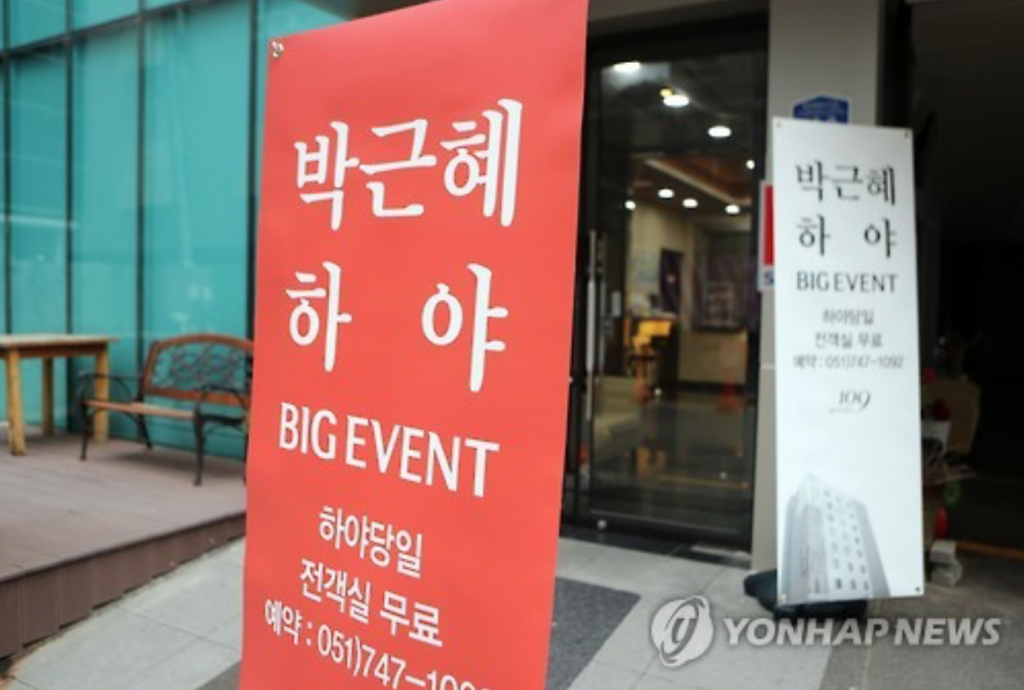 “I couldn’t participate in the candlelight rallies. But as a responsible father of a child, this is what I can do. So I decided not to charge any fees on the day that the president resigns.” (image: Yonhap)

BUSAN, Nov. 22 (Korea Bizwire) – A business hotel in Busan has attracted a lot of attention after promising free accommodations on the day that Korea’s troubled President Park Geun-hye steps down.

At the front of the hotel entrance were two banners that read “President Park Geun-hye’s Resignation – Big Event – All Rooms Free on the Day of Resignation,” while another banner on its wall asked the president, who has now been labelled as an accomplice in the corruption scandal, to step down.

The hotel’s CEO, whose identity was withheld, said the event was not intended to be used as a publicity stunt, but rather with the genuine hope that the president takes full responsibility for the scandal and leaves office.

“We began our event last Friday,” he said. “I worry that media coverage will make people think of it as a marketing scam.”

“I couldn’t participate in the candlelight rallies. But as a responsible father of a child, this is what I can do. So I decided not to charge any fees on the day that the president resigns.”

The troubled South Korean president is embroiled in the biggest corruption scandal Korea has seen in years, with hundreds of thousands of Korean citizens taking to the streets in protest for weeks now.

She was labeled by prosecutors on Sunday as an accomplice on charges of abuse of power, which her confidante Choi Soon-sil and her former aide An Chong-bum are currently indicted under, for pressuring companies to make monetary contributions to two foundations – Mir and K-Sports Foundation –operated by Choi.