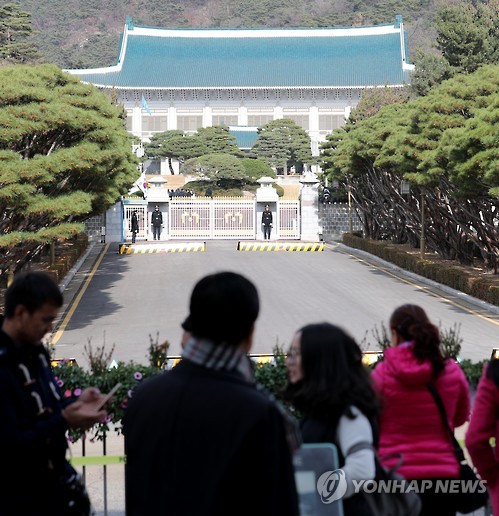 A group of Chinese tourists views the main gate of the presidential office Cheong Wa Dae in Seoul. (image: Yonhap)

At Samsung, the reshuffle of executive-level officers, usually carried out on the first Tuesday of December, has been pushed back to after mid-month, according to inside sources. Dec. 6, the first Tuesday of December this year, happens to be the day that Lee Jae-yong, vice chairman of Samsung Electronics and the expected heir of Samsung Group, testifies at a parliamentary hearing.

Samsung is among a long list of conglomerates whose offices have been raided by the prosecution in an investigation of the so-called Choi Soon-sil-gate. Choi, a longtime close friend of President Park Geun-hye, is accused of extorting money from businesses to launch and operate two foundations that she controlled. The prosecution has concluded that the president was an accomplice to Choi’s suspected crimes.

The hearing is expected to focus on the shady donations by conglomerates to the foundations and whether they received special favors in exchange.

As CEOs grapple with the prosecution probe, corporate activities have been thrown off track, sources say. Samsung Electronics still has 12.3 trillion won (US$10.46 billion) of facility investment left to be executed this year, nearly half of the 27 trillion won planned for the year. Inside sources said special bonuses for Samsung Electronics employees, paid sometime in February every year based on corporate performance, could be delayed and slashed in amount.

Chung Mong-koo, head of Hyundai Motor, is also due to testify at the parliamentary hearing. For the first time since the launch of the automotive group, the conglomerate canceled the annual conference of oversees officers. Some 900 staff members working at foreign offices of Hyundai Motor were invited to Seoul yearly for briefings and meetings on business strategies and planning. The cancellation also has to do with Hyundai’s belt-tightening to weather financial hard times, which includes a 10-percent salary cut for all executives.

The government selection of new duty-free shop operators, initially scheduled for December, may be delayed or canceled altogether due to the Choi Soon-sil scandal, according to corporate sources. The duty-free business has always been under suspicion of backhand dealings because of unclear criteria in the selection process, and the discovered links between Choi and conglomerates have fanned such allegations.

Lotte Group, the biggest operator of duty-free shops, is being investigated as well, making any business decisions virtually impossible.

“When we meet business people from other countries, the first thing we are asked is what is going,” an official from one of the conglomerates said. “It takes time to explain ourselves, and it is also true that our business image is being damaged.”

Another corporate official said the biggest problem is not being able to do business.

“The most problematic part is that the efforts needed for top decision-making are seized elsewhere when we should be busy planning next year’s business and investment plans, making us neglect our real duty of managing business,” he said.