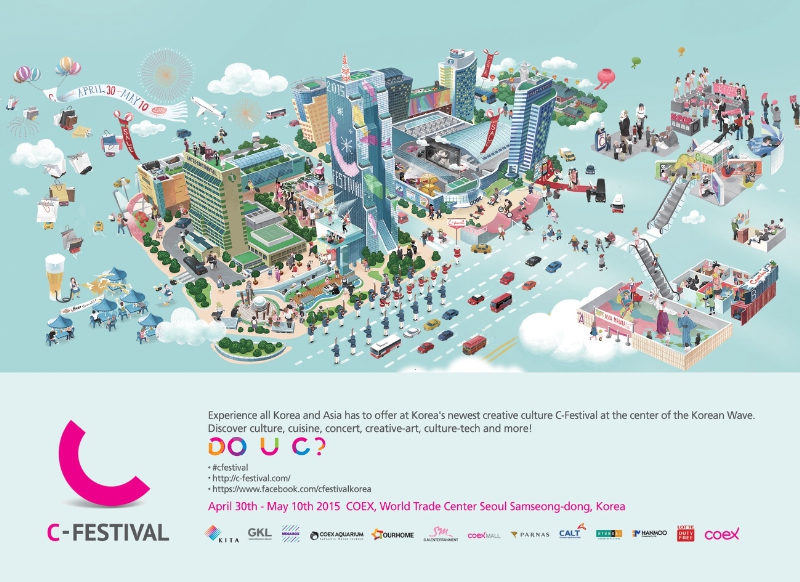 The goal of C-Festival is to foster the MICE Cluster established by the 13 companies of the Korea World Trade Center into the MICE business hub of Korea and Asia. (image: C-Festival Organising Committee)

The goal of C-Festival is to foster the MICE Cluster established by the 13 companies of the Korea World Trade Center in Samseong-dong into the MICE[2] business hub of Korea and Asia. It aims to be “the world’s only global MICE business convergence festival.”

The festival will be hosted at the Korea World Trade Center including COEX from April 30 to May 10, 2015. C-Festival will feature diverse content including exhibitions and conferences highlighting new concept converging culture, arts and technology. The cultural exchange exhibition will be based on content from Korea, China, Japan and Russia. Concurrent events include a culture & technology exhibition, art collaboration exhibition, large-scaled international medical conference, AFECA, MICE forum, performances leading the Korean wave and events including K-pop performances and media arts.

In addition, EXO, the K-pop idol group representing SM Entertainment, which is participating in the Korea World Trade Center MICE Cluster, was selected as an ambassador of C-Festival to promote the festival and Korean pop culture globally.

MICE Cluster (The C-Festival Organizing Committee) plans to host the festival on an annual basis, starting with the 2015 C-Festival. This will fortify the position of the Korea World Trade Center as the MICE business leader of Asia, while attracting buyers and tourists with differentiated content converging culture, arts and technology. Korea World Trade Center and its neighborhood will promote the C-Festival as the Edinburgh Festival of Korea focusing on MICE, and improving national brand awareness by activating the domestic economy and the service sector.

The Chairman of MICE Cluster, Byun Bo-Kyung (CEO of COEX), said, “We will successfully host C-Festival in May 2015 and increase the number of foreign buyers visiting the Korea World Trade Center from 1.31 million to 3 million by 2017. We expect the Korea World Trade Center and its neighborhood in Samseong-dong will emerge as a must-visit tourist and cultural spot among foreign tourists. C-Festival will become the Edinburgh Festival of Korea.”

The MICE industry is a new growth engine gaining global attention, as it converges tourism, trade, culture and hospitality. Seoul City designated the Korea World Trade Center as the “Gangnam MICE Special Tourism Zone” to activate the tourism and MICE industries of Seoul on December 18, 2014. COEX and Seoul City also cooperate to foster MICE business, which is the next-generation strategic business of Seoul, as well as the tourism industry.

[2]
MICE stands for meetings, incentives, convention and exhibitions, and refers to the industry including international conferences, exhibitions and tourism.