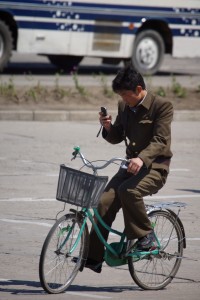 Have I entered the WiFi hotspot zone? (image: Wikipedia)

SEOUL, Sep. 10 (Korea Bizwire) – Where is the most popular Wi-Fi hotspot in North Korea, well known for its people totally shut off information from the outside world?

The answer is villages around Daedong River(Taedong River) in Pyongyang, where many housings for foreign embassies and international non-governmental organizations are located in.

So what has something to do with WiFi hotspot zones and enclaves for foreigners? This is because many foreigners used to access the Internet using wireless networks in the area. But this practice has resulted in an unexpected situation in terms of real estate market and, most importantly, North Korea’s national security problems.

First, the housing market fluctuation in the area. According to North Korea Intellectuals Solidarity, the news outlet dedicated to North Korean news, reported that “a residential quarter near foreign embassies in Daedong River area saw a huge price surge in the housing market, largely driven by rumors that it is possible to get a free Internet connection around the area.”

North Korean authorities, however, have responded sensitively to this unusual factor driving the housing prices. From now on, expatriates staying in North Korea can no longer use satellite or Wi-Fi technology to connect to the internet, citing interests of national security as the reason behind the decision, reported NKNews.org and ITAR-TASS yesterday.

And the penalty for violating this decree is somewhat huge. According to TeleGeography which also covered this news,  all respective telecoms equipment must be dismantled immediately, and anyone who continues to use Wi-Fi/satellite illegally could be fined up to KPW1.5 million (USD11,111) under the new rules, effective 13 August 2014.