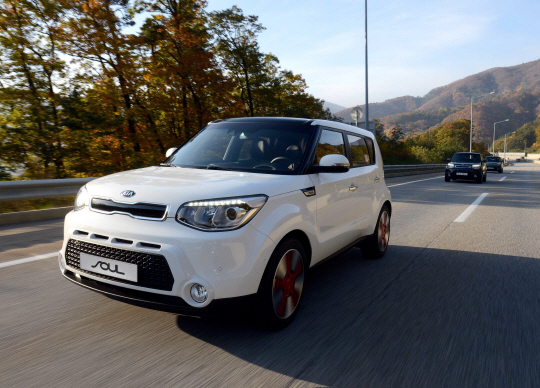 The Kia Soul is one of such models. Last year, the subcompact was sold only 2,784 units within Korea but as many as 99,558 overseas. Most Soul cars assembled in Kia Motors’ Gwangju Plant were shipped to the U.S. market.(image: Kia Motors)

SEOUL, Korea, Jan 20 (Korea Bizwire) – There are some athletes who play better in international matches while putting up mediocre performance at home. In the same way, there are some car models that sell well overseas while selling fewer than 10,000 units domestically. The Kia Soul is one of such models. Last year, the subcompact was sold only 2,784 units within Korea but as many as 99,558 overseas. Most Soul cars assembled in Kia Motors’ Gwangju Plant were shipped to the U.S. market. The reason American consumers love the Soul has to do with its boxcar design. But that has been precisely the reason Korean consumers stay away from the model.

A similar-looking mini crossover utility vehicle “Chevrolet Trax,” produced in GM Korea’s Bupyeong Plant, has been sold 194,225 overseas last year, 24 times more than the figure (8,064) sold at home. The number of Trax cars sold in the international market last year is higher than that of all models sold by GM Korea in Korea (150,000). Built on the platform of the subcompact “Aveo,” the Trax gained the popularity among foreign consumers because of its larger interior space than any other rival models of the same class. The reason, however, that it didn’t sell well in Korea may have to do with its uncompetitive price of 19.4 to 22.9 million won.

Kia’s Pride is also one of the cars that exhibited a big difference between overseas and home markets. Last year, it was sold 11,037 units in Korea but 222,149 overseas. Once the best-selling model in Korea, the Pride has lost its edge as most Korean car buyers opt for smaller city cars or larger mid-sized cars. In response to the change in consumer taste, Kia Motors today is focusing more on foreign markets to sell the Pride.

The Hyundai Accent is also a model mostly for export markets. Last year alone, it sold 242,247 units overseas while selling only 28,607 domestically. The Accent, called “Solaris” in Russia and “Verna” in China, has become a strategic subcompact model for the company since 2010.

Why then are the four export models showing lackluster performance at home? Officials in major car makers said that’s because most car buyers tend to go for cheaper city cars that they can get a variety of benefits such as registration tax, insurance discount, and toll and parking discount. Other more affluent buyers are willing to pay a few million won more to upgrade to mid-sized cars. As for the unpopularity of CUVs such as the Soul and Trax, an auto industry official said, “Most Korean motorists prefer sedans over SUVs or CUVs.”