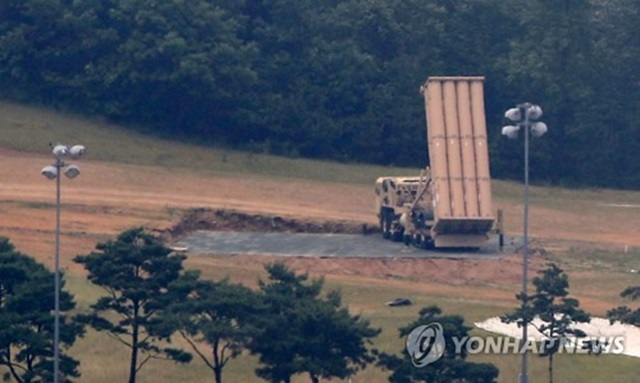 The remarks followed Cheong Wa Dae’s probe over an allegation that the defense ministry may have tried to keep the deployment under a blanket. (image: Yonhap)

“We are not saying the two launchers and other equipment that has already been deployed should be withdrawn. But those that have yet to be deployed will have to wait,” a senior Cheong Wa Dae official told reporters.

The remarks followed Cheong Wa Dae’s probe over an allegation that the defense ministry may have tried to keep the deployment under a blanket.

The probe concluded a ministry official did in fact keep secret the delivery of four more THAAD launchers to the country, while the defense ministry also sought to make the whole program appear less in size and scale as an apparent attempt to insulate it from an all-out environmental impact evaluation.

Following the conclusion of its probe, the presidential office ordered the defense ministry to conduct a full environmental impact assessment.

So far, two THAAD launchers have been deployed out of the total six that make up a THAAD battery.

The Cheong Wa Dae official said the additional four will have to wait until the end of the study on their environmental impact.

When asked to confirm, the official noted the assessment could take up to a year.