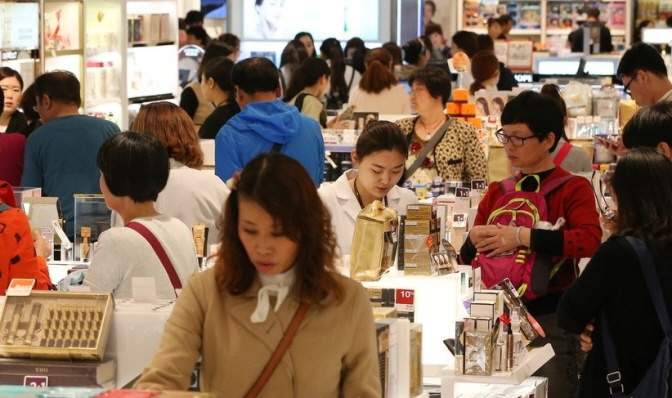 Chinese tourists at a duty-free shop in Seoul. (Yonhap)

The report compiled by the Korea International Trade Association (KITA) showed that 65.6 percent of outbound shipments of locally made cosmetics products headed to China, Hong Kong and Taiwan in 2018.

Exports of cosmetics products to the 10-member Association of Southeast Asian Nations (ASEAN) market only accounted for 10.6 percent last year.

The report expressed concerns that such heavy export dependence on China could undermine South Korea’s overall cosmetics industry due to factors such as an ongoing trade war between the United States and China, and anti-government rallies in Hong Kong.

The move has impacted cosmetics manufacturers and retailers, who relied heavily on Chinese tourists for sales.

The report further said people in ASEAN countries are poised to value Korean products on the back of hallyu, or the Korean Wave, centered on K-pop and various other entertainment content.