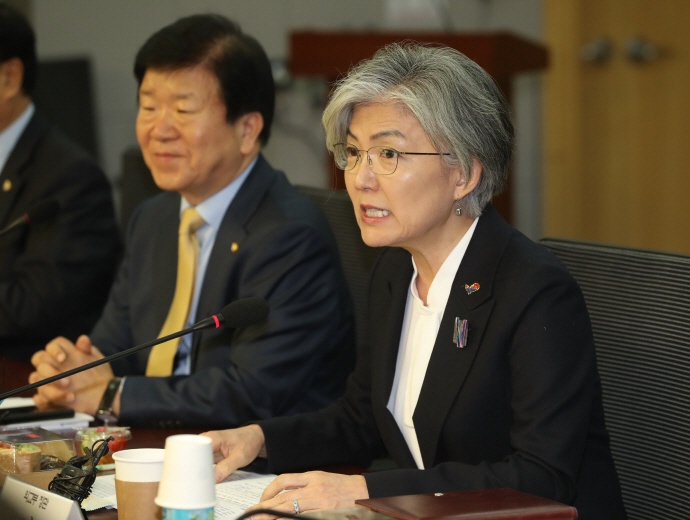 SEOUL, Mar. 7 (Korea Bizwire) — South Korea’s top diplomat said Thursday that there is a link between China and the worsening air pollution in South Korea, which officials here describe as tantamount to a disaster.

“It’s true that there’s a cause (of fine dust) stemming from China,” Foreign Minister Kang Kyung-wha told reporters as she emerged from a National Assembly meeting on the North Korea issue.

She was asked about the Chinese government’s view on the fine dust problem in China’s neighbor.

A day earlier, Chinese foreign ministry spokesman Lu Kang said at a press briefing, “I do not know if there’s sufficient ground (to say) that fine dust in South Korea has come from China.”

It looks like that there has been no fine dust in Beijing “over the last two days,” when Seoul was blanketed by dense fine dust, he added.

“The cause (of fine dust) is very complicated,” he said. “Comprehensive handling should be based on a scientific attitude.”

His remarks came hours after President Moon Jae-in called for joint efforts with China to combat the problem.

Ruling and opposition parties also agreed to pass a set of bills next week aimed at improving air quality. They include a measure to declare severe fine dust a “national disaster” and use state funds to tackle it.

A senior lawmaker of the major opposition Liberty Korea Party delivered a protest letter to the Chinese Embassy in Seoul, along with satellite photos that he said prove China is the main source of the fine dust that is covering the Korean Peninsula.

South Korea and China held talks between their environment ministers and discussed possible joint steps against fine dust, according to Kang.

Meanwhile, she dismissed a news report on her recent phone talks with U.S. Secretary of State Mike Pompeo as groundless.

A Seoul-based newspaper reported that Pompeo had complained about Seoul’s stated plan to consult with Washington on restarting the two suspended inter-Korean economic projects — the Kaesong Industrial Complex and the Mount Kumgang tour.

Kang and Pompeo had 30-minute phone talks last Friday, a day after the second U.S.-North Korea summit finished with no deal in Hanoi.

The news report is “not true at all,” the minister said. “There was no conversation at all” in connection with the Kaesong and Kumgang issues.

Pompeo provided a briefing on the Hanoi summit results, she added.