Speaking at an annual press conference, Gao also reiterated that South Korea and China will spare no effort to formally sign a bilateral free trade agreement with South Korea.

“Based on the conclusion and signing of the China-Korea FTA this year, we will also move forward and accelerate China-Japan-Korea FTA negotiations,” Gao said. 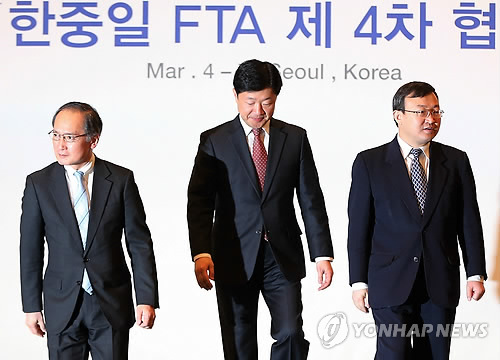 ncluding free trade negotiations last November, South Korea and China completed the “initialing” of the deal last month, marking one step closer to the official signing. Both sides voiced their hope to sign the deal within the first half of this year.

Gao described the free trade deal with South Korea as a “high-standard,” saying it will significantly boost bilateral trade between the two nations.

In late 2012, South Korea, China and Japan launched three-way free trade talks aimed at slashing tariffs and other barriers among the three leading economies in Asia, but the negotiations have reported little progress. If successful, a deal would create one of the world’s biggest economic blocs with a combined gross domestic product of US$15 trillion.

Diplomatic tension between China and Japan run deep because of competing claims over islands in the East China Sea. Relations between Seoul and Tokyo also remain frayed over Japan’s unrepentant attitude over its wartime atrocities, including the sexual enslavement of women by the Japanese military during World War II.

Beset by weak global demand, China has lowered its growth target in trade to “around 6 percent” this year.

Gao said China is “confident of meeting the target of 6.1 percent” growth in trade this year.

The annual press conference was held on the sidelines of China’s National People’s Congress, the country’s rubber-stamp parliament controlled by the Communist Party.