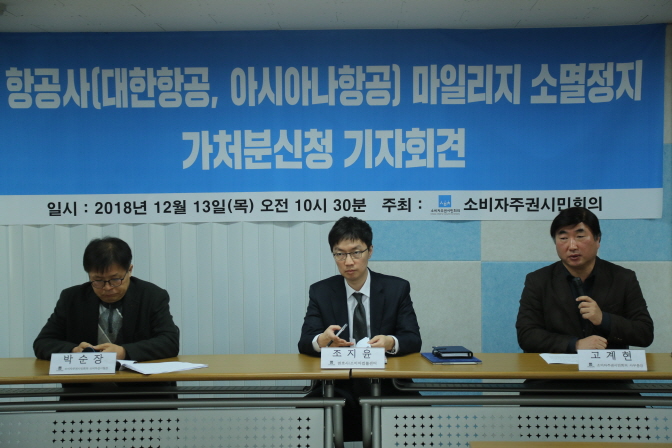 Citizens United for Consumer Sovereignty held a press conference on December 13 to announced that they would be representing seven individuals whose mileage is about to expire. (image: Yonhap)

SEOUL, Dec. 14 (Korea Bizwire) — A South Korean consumer rights group has applied for a provisional injunction against the two major South Korean airlines, Asiana Airlines Inc. and Korean Air Lines Co., after it was announced that some mileage accrued under their frequent flier programs would expire next year.

Citizens United for Consumer Sovereignty (CUCS) held a press conference on December 13 to announced that they would be representing seven individuals whose mileage is about to expire.

The focus of the provisional injunction is that airlines are intentionally limiting the use of mileage and are trying to unilaterally revoke mileage by applying an arbitrary 10-year expiration date without consumer consent.

In 2010, the Ministry of Land, Infrastructure and Transport and the airline industry modified the terms of frequent flier programs to institute mileage expiration dates.

Ultimately, by January 1st 2019, mileage accumulated since 2008 will start to expire.

The civic organization has pointed out that the usage of mileage is highly limited, and even though mileage is considered as a right of ownership, it can not be sold or transferred, unlike in other countries.

Representatives of the group went on to explain that total mileage accumulated at the two major airlines was expected to exceed 3 trillion won (US$2.65 billion) by December 2018.

Even though Korean Air claims that mileage loss next year would only account for 1 percent of the total accrued mileage, the CUCS estimated the expected losses to be closer to 30 percent.