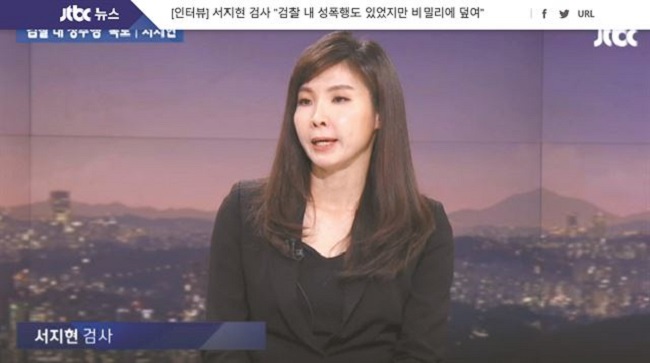 SEOUL, Feb. 1 (Korea Bizwire) — After public prosecutor Seo Ji-hyeon stepped into the limelight to detail her experience of sexual harassment by a senior figure (Seo alleges she was inappropriately touched at a funeral in 2010 and that her complaints resulted in her being moved to a new role), numerous accounts of sexual harassment have begun to surface on social networking sites.

With the #MeToo tagline that has become a rallying call for women who have been the victims of harassment, one individual posted on Facebook a lengthy description of having suffered from innuendo and unwanted touching by an academic advisor and lecturer.

According to the post, the academic advisor sent messages such as “let’s have dinner alone”, while a lecturer touched her body inappropriately and frequently uttered problematic statements without hesitation. When this individual informed the academic advisor of the goings-on, the complaint was dismissed as “[the lecturer] is fond of you and doesn’t mean anything by it”.

The poster revealed that requests to complete academic work with a different professor were met with total silence and “mean and cowardly backlash”.

The poster revealed that requests to complete academic work with a different professor were met with total silence and “mean and cowardly backlash”. (Image: Yonhap)

University online community boards were likewise abuzz with #MeToo taglines and similar recounting of experiences ranging from the detestable to outright deplorable. Taken as a whole, the majority of the posts on the internet described situations but did not name names, instead expressing hope that other women may be spared from having to undergo such ordeals.

A cautionary tale of being a victim of date rape and the everyday struggle of feeling shame and self-loathing from having to face one’s tormentor yet do nothing for fear of negative consequences were only two examples found on university online community boards.

On the presidential Blue House’s public petitions website, over 100 requests have been filed along the lines of “We call for a fair investigation into prosecutor Seo Ji-hyeon’s sexual harassment case” and “Please launch a task force to investigate cases of sexual harassment”.

Meanwhile, on January 31, Seo released a statement that said, “I hope that people take note of why, in the aftermath of [the sexual harassment incident], I was unable to raise my voice and speak on the incident, and also why when I did speak out, the organization that I work for refused to listen to me.”

Inspired by Seo’s testimony, voices from within the legal sphere are calling for the mostly male-dominated sector’s working culture — believed to be particularly contaminated with problematic attitudes regarding sexual harassment — to be revamped.

Criticism has been levied not only against the actual perpetrators, but also for the male figures who are aware of the existence of sexual misconduct towards their female colleagues yet do nothing.