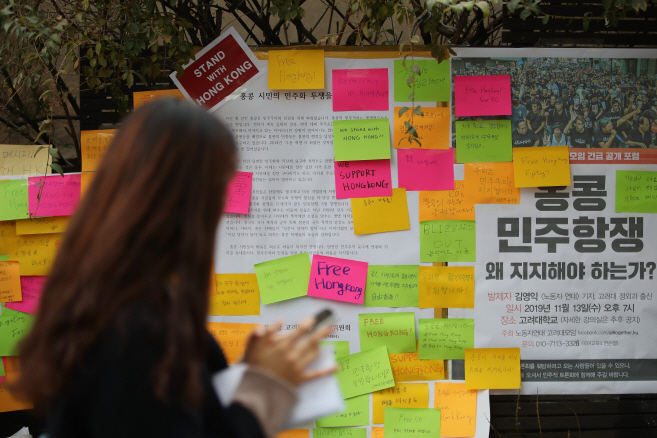 The clash is also spreading throughout universities in South Korea, where banners in support of democracy in Hong Kong are being put up and taken down by supporters and their opposition.

Since Monday, a series of articles have been posted on Korea University’s online forum talking about hand-written posters placed around the school’s campus supporting democracy in Hong Kong that were ripped apart and thrown away by unknown individuals.

The author of the online post said he saw one or two angry Chinese tearing down a poster and throwing it in the trash can. The nationality of these individuals has yet to be confirmed.

The said poster has been put back up.

The General Students’ Association expressed deep regrets for those who have infringed upon freedom of expression on the school campus by deliberately damaging the poster over three consecutive occasions in a violent, repressive manner.

Several Chinese students were also seen putting up posters opposing the Hong Kong protests right next to the ones supporting them.

There were reports of several people engaging in arguments when some students asked why the protests were illegal.

“Exchanging opinions on issues about world politics is good,” said Lee Ju-hyung, a student at Korea University. “But tearing down posters just because there are differences in opinion is not acceptable.” 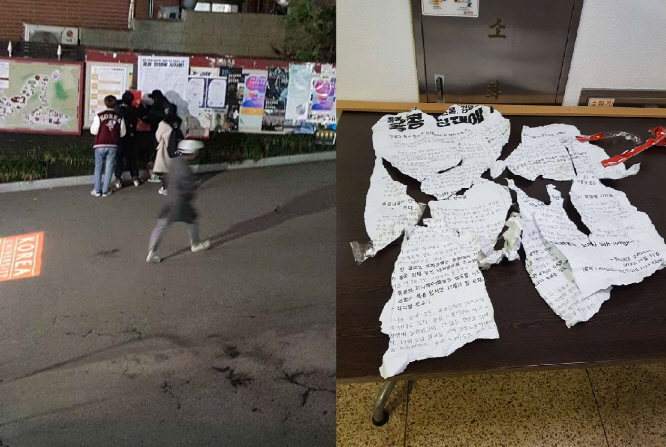 Now, on the school’s bulletin board, there are dozens of post-its with various slogans calling on students to support the protests in Hong Kong.

There are also notes that call the protests an act of ‘terrorism,’ asking Koreans why they are so interested in “someone else’s business.”

Previously, a banner put up by a student club in support of the protests in Hong Kong at Yonsei University late last month was found taken down by unknown individuals.

Reports told of Chinese individuals taking down the said banner.

The ‘Lennon Wall’ was recently put up by a student club at Seoul National University to express support for the Hong Kong protests, where memos criticizing the protests can also be found.