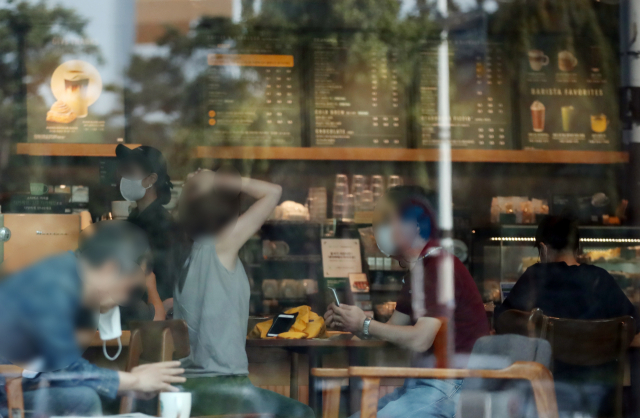 SEOUL, Sept. 14 (Korea Bizwire) — Owners of restaurants, franchise coffee shops, bakeries, beer halls and many other private businesses in the greater Seoul area are gearing up to resume normal operations after the government relaxed its anti-coronavirus measures beginning Monday.

Over the past two weeks, people in Seoul, Gyeonggi Province and Incheon were banned from eating or drinking in restaurants, beer halls and cafes past 9 p.m. under the so-called Level 2.5 social distancing guidelines, while franchise coffee chains, bakeries and ice cream parlors were permitted to offer only takeout and delivery.

Starting Monday, those facilities will be permitted to operate normally, though they are still obliged to follow strict sanitation rules under the Level 2 scheme.

Business owners hit hard by the unprecedented business restrictions welcomed the eased anti-COVID-19 rules, though they still wonder if virus-weary customers will return like in the past.

An Uijeongbu resident, who runs a small diner that sells gimbap, or seaweed rice rolls, in the city just north of Seoul, switched back to 24-hour operation soon after the government announced the downgrade in social distancing rules.

“I’m relieved by the news of relaxed business restrictions. I have suffered heavy losses because the proportion of nighttime sales is important for me,” the owner said.

“I decided to resume overnight business after learning of the news, but it’s unclear whether customers will come as before.”

A 67-year-old man surnamed Han, who runs a beer hall in Gunpo, just south of Seoul, also expressed both expectations and concerns.

“My monthly store rent is 4 million won (US$3,380), though there were many days over the past two weeks when I couldn’t earn 100,000 won a day. The business loss was unbearable,” Han said.

“It’s fortunate that the business restrictions have been lifted but it is questionable whether people wary of the coronavirus will again show up on the streets,” he said.

A Suwon man, who runs a bossam, or boiled pork dish, restaurant in his own building in the Gyeonggi Province capital, lamented that he had suffered dearly from the two-week ban on late-night business.

“My business loss was enormous due to the late-night ban though I’m free from rent payments. I recently let go two employees and now work with my wife and son,” the man said.

An owner of a meat restaurant in Goyang on the northwestern outskirts of Seoul said he is relieved by the lifting of late-night operations but still remains restless because policies can change anytime and the consumption pattern of customers can change entirely. 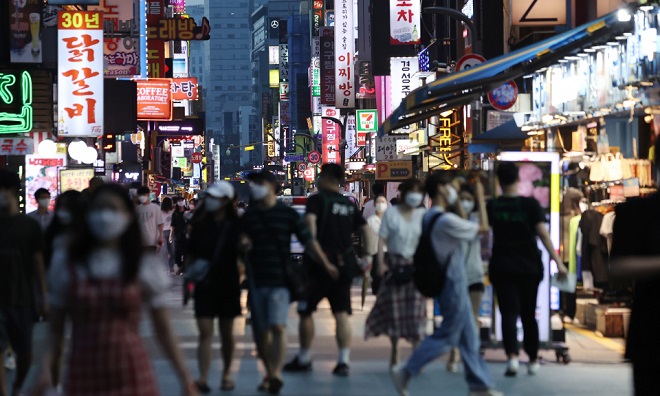 This file photo taken on Aug. 28, 2020, shows a street of restaurants and entertainment facilities full of pedestrians in eastern Seoul. (Yonhap)

Franchise coffee shops and bakeries in the metropolitan areas are now busy refurbishing tables and chairs to welcome back customers inside the outlets.

Both franchise coffee shop owners and customers said they are glad to see the tough social distancing guidelines relaxed a bit.

The owner of an indoor screen golf range in Dongtan, 60 kilometers south of Seoul, has sent out a mobile phone message to his members announcing that business is to resume normally at midnight Sunday.

“My customers who haven’t played golf in the past two weeks have been more frustrated. I have anxiously waited for the relaxation of the quarantine rules,” the owner said.

Internet cafes have also been allowed to reopen after authorities excluded them from high-risk facilities, though they are slapped with a lengthy list of restrictions, including no entry for minors, an eating and drinking ban and sufficient distancing among people.

An internet cafe owner in Incheon, surnamed Jeong, said his shop will remain open even after midnight from Monday but that customers are not likely to come as before due to the many operational restrictions, particularly the ban on minors.

Meanwhile, resentment appears to be mounting among owners of karaoke rooms and bars, as their establishments are still prohibited from operating under the Level 2 social distancing scheme.

“Many karaoke rooms are actually in a state of insolvency as they have been forced to close for nearly one month since Aug. 19,” said Kim Seok-ho, who leads an association of karaoke room owners in Gyeoggi Province.

“The government’s criteria for selecting high-risk facilities can hardly be understood because the risks of droplet infections still exist significantly in restaurants, cafes and many other facilities as well,” Kim said.