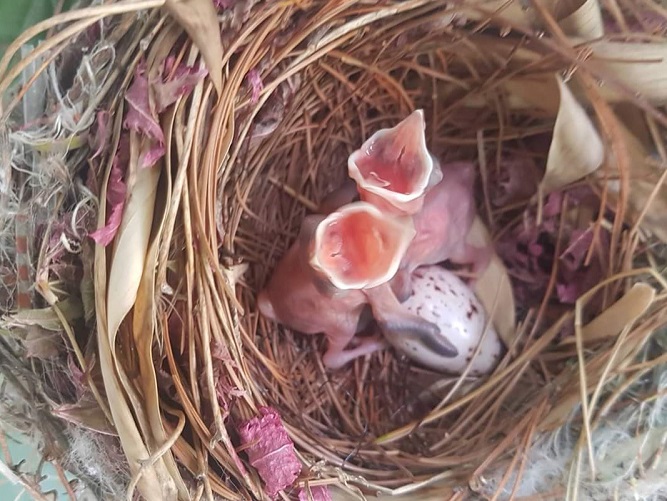 This photo shows baby birds found in a nest inside the Constitutional Court building in Seoul with their mouths open on June 22, 2020. (Yonhap)

SEOUL, June 21 (Korea Bizwire) — The Constitutional Court has halted interior remodeling work at the courthouse building to give time for newly born birds found in a nest inside the building to grow and fly on their own, officials said Sunday.

Construction workers found the nest holding three eggs inside an open-roofed area of the building in central Seoul while replacing window frames Friday. The mother bird was often seen sitting on the eggs, and two baby birds have since hatched.

The baby birds were seen opening up their mouths wide repeatedly to ask for food, and their mother shuttled frequently from the nest to catch worms and insects to feed them, officials said.

The bird was later identified as the brown-eared bulbul, a resident bird in Korea.

Though they are not a rare or endangered species, the court decided to halt the construction work at the area to wait for the baby birds to grow because construction dust and noise could affect their growth, officials said.

“We decided to reschedule the overall construction schedule to help the birds grow well,” an official said.

Officials said they expect it will take about two weeks for the birds to grow enough to fly.