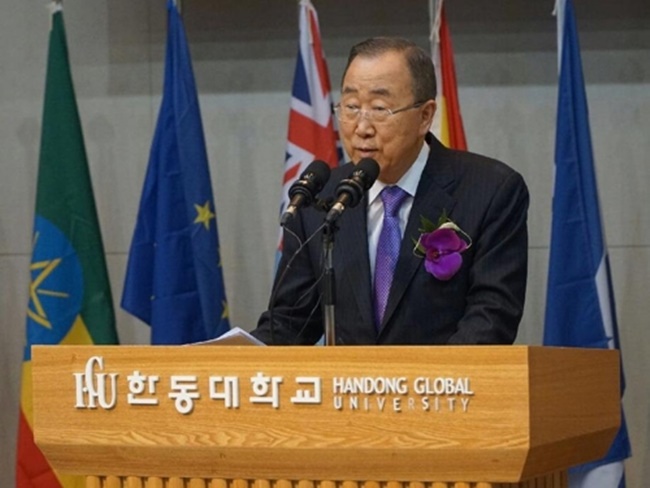 UNAI Korea is building the Ban Ki-moon Global Education Institute (GEI) to help realize the U.N.’s Sustainable Development Goals (SDGs) and nurture related global experts. The UNAI is short for the U.N. Academic Impact, an initiative launched by then-U.N. chief Ban in November 2010 to align institutions of higher education, scholarship and research with the U.N. At present, more than 1,000 institutions in over 120 countries and some 40 academic networks are now members.

“I hope the GEI will be a place for a well-rounded education that combines personality and expertise,” Ban said in a congratulatory speech.

Ban stressed that countries and interested parties should come together for global civic education, saying, “The three axes of globalization education are peace, development and human rights, and in particular, peace and development have no meaning without human rights.”

The three-storied GEI, to be built on a 3,400-square-meter lot and completed by October next year, will house the Handong GRACE School for rounded education and the Ban Ki-moon Sustainable Development International Research Center.

The institute will focus its efforts on carrying out SDG research, supporting developing countries and nurturing related youth leaders.

This is an artist’s rendering of the Ban Ki-moon Global Education Institute (GEI). (Image: Handong)

The Institute will also seek exchanges with UNAI ASPIRE, a student branch of the UNAI. The Actions by Students to Promote Innovation and Reform through Education (ASPIRE) is intended to embody the UNAI’s 10 principles within student communities around the world. One of the UNAI principles is a commitment to educational opportunities for all people regardless of gender, race, religion or ethnicity.

“We’ll continue to endeavor to undertake SDG research and cultivate global experts with some 1,200 UNAI member institutions and faculties around the world as well as with 68 local universities,” Handong President Chang Soon-heung said. Handong is one of the 10 UNAI hub universities.