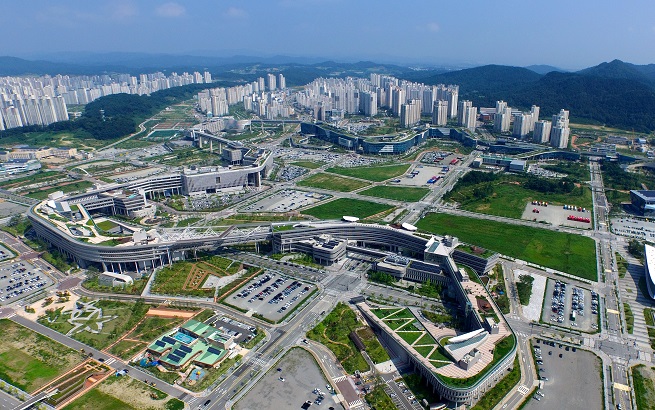 SEOUL, July 24 (Korea Bizwire) — The ruling Democratic Party (DP) has been stepping up efforts to renew a more than decade-old plan to relocate South Korea’s administrative capital to Sejong, south of Seoul, in the face of strong protests from opposition lawmakers.

During a party meeting on Thursday, DP floor leader Kim Tae-nyeon expressed his determination to “follow through” with the capital relocation vision to help tackle overpopulation in Seoul and nearby cities.

He then announced a plan to launch a special party task force in charge of the mission.

Roh sought to move the country’s administrative capital from Seoul to what is now the administrative city of Sejong, with the goal of economic and political decentralization.

The bold policy plan was dashed, however, with a Constitutional Court ruling in 2004 deeming the move away from Seoul unconstitutional.

The court then said Seoul has conventionally been the capital of the country since the Joseon Dynasty (1392-1910) and thus the envisioned capital relocation should be preceded by an amendment to the Constitution.

The plan has since been scaled down to the relocation of only some Cabinet ministries and government agencies to Sejong, now an administrative town, and thereby has flown under the political radar.

The ruling DP maintains that a constitutional amendment for capital relocation is out of the question. But the party still considers it possible to circumvent the plan’s unconstitutionality by revising the related law on Sejong, based on a bipartisan agreement.

“The court decision that the country’s capital has (conventionally) been Seoul is not permanently unchangeable,” the DP floor leader said Tuesday, indicating that the 2004 ruling based on unwritten law could be overturned due to a change of public perception about the capital over the past 15 years.

The main opposition United Future Party (UFP) immediately protested the relocation plan and contended that the DP should first face up to the Constitutional Court ruling and start from there to reopen any debate on the issue.

“The DP is finally resorting to a capital relocation after its measures to curb real estate speculation yielded no results … while the approval rating for the president tumbled,” UFP interim leader Kim Chong-in said during a party meeting Thursday. 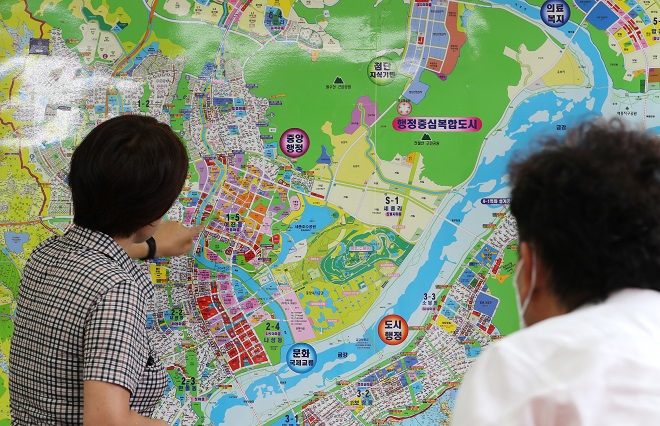 A citizen consults a real estate broker in Sejong on July 22, 2020, following the renewal of the capital relocation plan. (Yonhap)

The latest policy drive from DP came after several weeks of decline in the approval rating for President Moon Jae-in, largely due to his government’s repeated failure to stabilize the overheated real estate market, in particular apartment prices in the greater Seoul area.

UFP floor leader Joo Ho-young said in a radio interview Thursday that a constitutional revision or a referendum should be a prerequisite for pushing ahead with the capital relocation.

“The capital relocation is a large-scale project that entails the relocation of Cheong Wa Dae, the National Assembly, as well as embassies in Seoul … the decision of the Constitutional Court should not be overlooked,” he noted.

Despite unrelenting protests, the DP, holding the majority 176 seats in the 300-member National Assembly, is likely to dominate parliamentary discourse down the road with the capital transfer drive.

Prime Minister Chung Sye-kyun, a member of the DP, also came to the defense of his party’s plan against the opposition’s protests.

Rebutting the UFP’s claim that the plan aims to divert public discontent, the prime minister said in a parliamentary session Thursday, “The administrative capital plan is a policy the DP has faithfully pushed for, for nearly 20 years since the presidential election in 2002.”

A recent public poll also showed this week that more than half of the public supports the administrative capital plan.

According to the Realmeter survey of 500 adults, conducted on Tuesday, 53.9 percent said they support the relocation plan while another 34.3 percent were negative about the plan.

The approval rating was more pronounced among respondents aged between 20-49.