SEOUL, June 29 (Korea Bizwire) — The Moon Jae-in government is coming under growing pressure to fundamentally review its real estate policy, as its 21 rounds of anti-speculation measures announced over the past three years appear to have largely failed to curb rising home prices in Seoul and other popular residential areas, critics said Monday.

As recently as June 17, the Moon administration came up with its 21st set of measures to further tighten lending rules and designate more areas subject to tighter regulations, as part of its perennial war on speculative housing demand.

But apartment prices in the Seoul metropolitan area are again on the upswing lately, prompting even progressive civic groups generally deemed friendly to Moon’s key policies to challenge the government’s real estate policy.

According to industry officials, an upward momentum has been apparent in Seoul’s apartment prices over the past week, due mainly to a so-called balloon effect from the June 17 measure that was mostly focused on cracking down on speculation in Gyeonggi, which surrounds Seoul, and other provincial cities.

Record high apartment transaction prices have been reported across the capital in the actual housing transaction data compiled by the Ministry of Land, Infrastructure and Transport.

A 125-square-meter apartment in Junggye-dong in the northern Seoul ward of Nowon sold for 860 million won (US$717,000) on June 18, an all-time high, marking a rise of 55 million won from 805 million won recorded in February for the same-size home in the same complex.

A real estate agent in Junggye-dong said there are few apartments available to sell despite rising prices.

“As many as 17 teams of aspiring homebuyers visited my office on Saturday alone. I’ve never been busier than these days for the past 20 years,” said the agent, speculating investors appear to be flocking to purchase low- to mid-priced apartments in Nowon and other northern parts of the capital.

A 85-square-meter apartment in Jamsil, southern Seoul, was traded for 2.3 billion won, compared with its previous price of 1.7 billion won recorded in March.

Prices of apartments in Seoul rose an average of 5 percent over the past five months, according to data from KB Koomin Bank.

The Moon administration has unleashed a series of comprehensive measures to stem rising home prices, but the regulations have only resulted in short-term letups in housing prices.

According to the Citizens’ Coalition for Economic Justice (CCEJ), a leading progressive civic group, the median apartment price in Seoul soared 52 percent, or 314 million won per unit, to 920 million won from 606 million won during the three years under Moon, which is twice the increase rate of the combined period of the conservative Lee Myung-bak and Park Geun-hye governments, estimated at 26 percent.

The coalition insisted that the wealth inequality has rather worsened due to the rising housing prices, saying the time it takes for the bottom 20 percent income group to buy an apartment in Seoul increased from 41 years at the beginning of Moon’s tenure to 72 years at the end of last year.

By contrast, the time needed by the top 20 percent income bracket to buy a Seoul apartment slightly rose from eight to 10 years under Moon.

“The Moon government has sharply increased the minimum wage under its income-led growth campaign over the past three years, but the apartment price rise of over 300 million won has rather lengthened the time needed to buy a Seoul apartment,” said the CCEJ in a news conference last Tuesday.

“The fundamental cause of the worsening real estate problem is the Moon government’s wrong policies. If it is truly willing to rein in the home prices, it should stop reckless large-scale development policies and present fundamental measures,” the coalition said.

The following day, however, the land ministry dismissed the CCEJ’s argument as wrongful and based on exaggerated statistical data, saying the median apartment price in Seoul has actually risen 14.2 percent during Moon’s presidency.

“If needed, the government will continue to take powerful and imminent measures (to curb speculative demand) at any time,” Land Minister Kim Hyun-mee said. 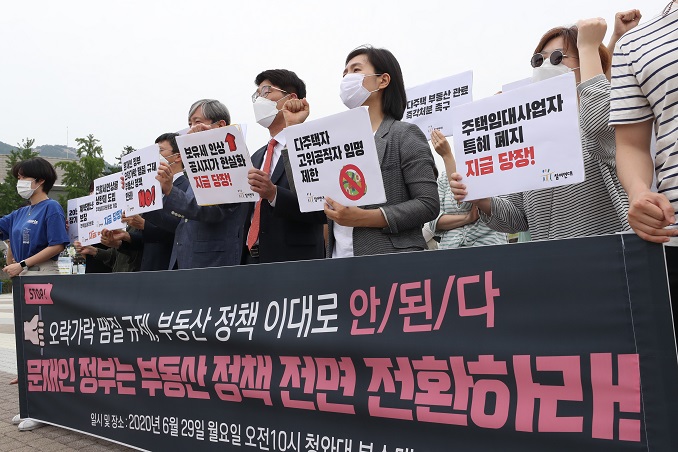 People’s Solidarity for Participatory Democracy (PSPD), another progressive civic organization, called for a thorough reexamination of the Moon government’s real estate policy in a news conference on Monday, after dismissing it as a virtual failure.

“The people’s resentment and anxiety over rising housing prices are gradually mounting. But the government has managed to belatedly issue anti-speculation measures for overheated areas. Housing prices have been shaken by inconsistent policies,” PSPD said in the conference held in front of Cheong Wa Dae, the presidential office.

“In his address for the new year this year, President Moon vowed to bring home prices back to the levels seen prior to his inauguration, but the reality has been the opposite of his pledge.”

It then called for the real estate holding taxes to be drastically raised, the capital gains tax be progressively strengthened for owners of multiple homes and the supply of long-term public rental housing be expanded, among others.

“Fifteen percent of all households own 61 percent of homes in our country. They buy more than one home because they can make money. Thus the capital gains tax should be increased for multiple home owners,” said Park Yong-dae, who heads a PSPD center for tax and fiscal reform.

“Speculation has been spreading despite the Moon government’s declaration of a war on speculation because policy failures have sent wrong signals to the market,” said Sim, who called for reinforcing property ownership taxes.