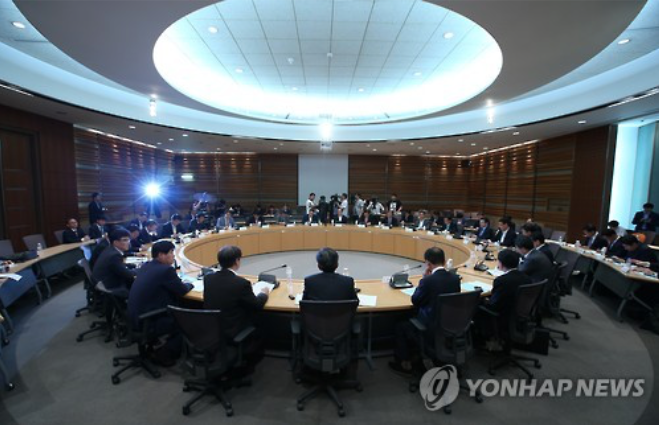 A meeting of vice minister-level officials is under way in Seoul on May 20, 2016, to discuss the introduction of performance-based salary system in public companies. (image: Yonhap)

SEJONG, May 24 (Korea Bizwire) – The government reiterated its position to adopt a performance-based salary system in state-run companies and institutions on a wider scale by the end of this year, a finance ministry official said Monday, as part of its efforts to reform the public sector.

The government has pushed forward with the full introduction of the system to encourage competition among public servants, since promotions and salary have long been based on seniority, not merit. The system has so far been applied only to the executive members of public institutions.

“The government’s position that it will expand the performance-based salary system in public enterprises by the end of June and quasi-government offices by the end of December has not changed,” said Jung Ki-joon, head of the public institutions policy bureau under the Ministry of Strategy and Finance.

Under the system, employees will be paid differently based on their achievements, with the difference in their annual salary expanding to an average of 3 percent from 2 percent.

The remark comes after the rival political parties pointed out last week that the government’s decision to adopt the system should come with the tripartite agreement between the labor, management and government sectors.

More than 70 percent of the employees of 116 public companies and agencies will be subject to the new wage system, up from 7 percent as of now, according to the ministry.

The decision is seen as the government’s determination to reform the public sector that frequently comes under criticism for lax management and mounting debts usually covered by taxpayers’ money.