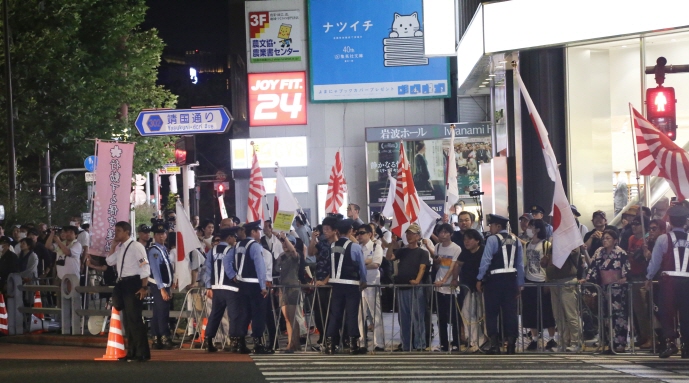 Anti-Korea rallies that had lulled recently have appeared again in Tokyo’s city center, creating ripples that transcend the realm of diplomacy. (image: Yonhap)

Japanese government officials have been continuously releasing resolute statements regarding the issue, which may have been a factor in the cancellation of a scheduled Japanese TV appearance by the Korean boy band BTS.

In addition, anti-Korea rallies that had lulled recently have appeared again in Tokyo’s city center, creating ripples that transcend the realm of diplomacy.

The cancellation of BTS’ TV appearance stems partly from a t-shirt that member Jimin wore five years ago, but critics say that the recent court ruling from South Korea has more likely affected the decision by the TV station to ban the Korean artists.

As controversy surrounding the ruling started to brew, TV station officials in Japan may have cancelled BTS’ appearance in line with the stance of the Japanese government.

Jimin’s T-shirt had the words “Patriotism,” “Our History,” “Liberation,” and “Korea” written in English on it, along with a picture of Koreans calling out for independence and a picture of an exploding atomic bomb.

On September 10, right-wing activists took to the streets near Tokyo Station and Ginza to hold anti-Korea rallies.

Participants marched the streets with the rising sun flag, the ultimate symbol of Japanese colonialism, and called out slogans such as “angry at Korea,” “return Takeshima,” and “break ties with Korea.”