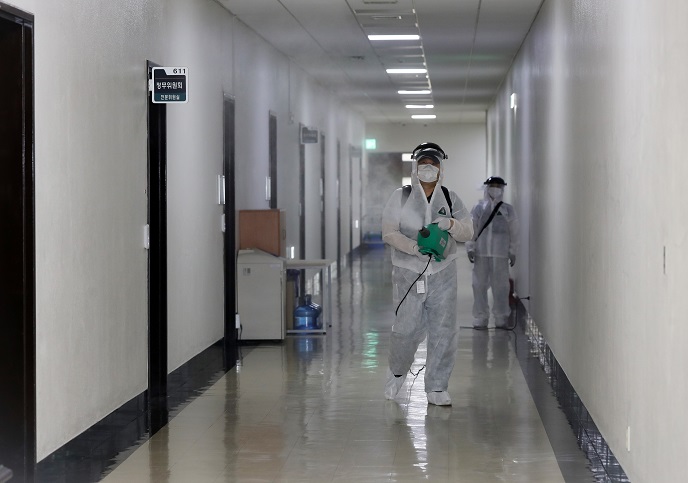 This photo, provided by the National Assembly on Sept. 7, 2020, shows a quarantine official disinfecting the parliamentary building in Seoul after a journalist covering the assembly tested positive for the new coronavirus.

SEOUL, May 7 (Korea Bizwire) — An increasing number of South Koreans are suffering from the “corona blues,” which refers to depression caused by COVID-19.

Following the coronavirus outbreak, those in their 20s and 30s have become relatively more prone to depression and even committing suicide than other age groups, a study showed Thursday.

The Korean Society of Traumatic Stress Studies conducted a study of 2,110 adults between the ages of 19 and 71, which showed that the average level of depression was 5.7 points, more than double the score from the previous study in 2018 (2.3 points).

Among respondents, 22.8 percent scored more than 10 points in terms of depression levels – six times higher than in 2018 (3.8 percent) – which shows that they are exposed to a risk of severe depression.

Those in their 30s already scored higher than other age groups last year in terms of depression levels, while those in their 20s actually scored the lowest. Now, they stand alongside 30-somethings as the most depressed age group.

The proportion of respondents who had thought about committing suicide grew from 9.7 percent in March of last year to 13.8 percent in September and 16.3 percent this March and April. The rate has more than tripled since 2018 (4.7 percent).