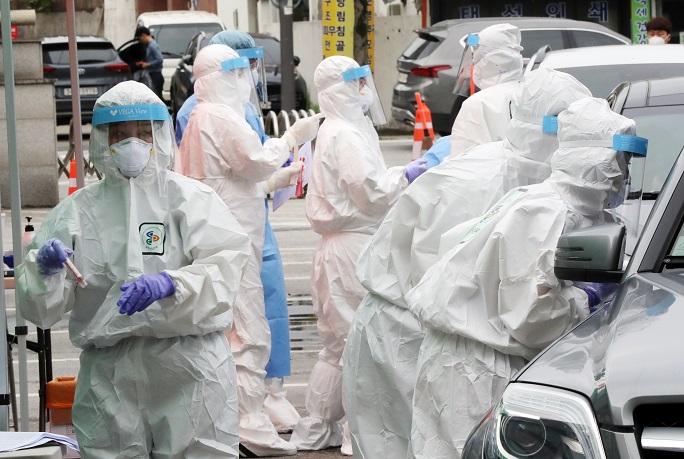 Medical workers gather samples from visitors at a drive-thru checkup center in Gwangju, 330 kilometers south of Seoul, in this file photo taken on July 6, 2020. (Yonhap)

Several large enterprises were forced to shutter domestic and overseas plants in the thick of the coronavirus pandemic between February and April.

Electronics giant LG Electronics Inc. is one of the latest victims. According to the sources, LG Electronics recently shut down its plant in western Indonesia after 200 workers were infected with the novel coronavirus.

The company plans to have all employees tested for COVID-19 and allow only those who test negative to report to work starting next week.

The company, a chemicals arm of LG Group and affiliated with LG Electronics, said the outbreak does not affect the factory’s production, as those infected are all office workers.

In addition, Samsung and other companies recently reported coronavirus cases at their domestic facilities, fueling fears over possible shutdowns.

On Tuesday, Samsung Electronics Co. reported virus-infected workers at its plants in Suwon and Yongin, both south of Seoul, though their production was not affected.

Samsung said Friday that an LED technology researcher at its Giheung Campus in Yongin, south of Seoul, tested positive for the coronavirus. The company said it has shuttered the building where the researcher worked and ordered others to work from home.

SK Group’s headquarters in central Seoul remained closed for the second day Tuesday after an employee tested positive for COVID-19.

The infected worker reportedly had contact with few or no colleagues, as most employees, excluding essential staff, work from home.

In the face of the coronavirus resurgence, local large corporations are ramping up anti-virus efforts, as any infection at plants would force them to shut down production lines.

Industry watchers voiced worries that a repeat of massive outbreaks in South Korea could have a negative impact on corporate earnings in the second half of the year.